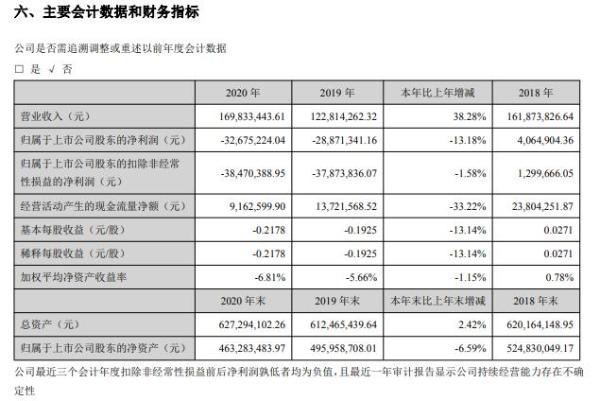 During the reporting period, the net cash flow from operating activities was 9162599.90 yuan, and the net assets attributable to shareholders of listed companies were 463283483.97 yuan by the end of 2020.

In 2020, under the influence of Sino US trade friction and New Coronavirus epidemic, the uncertainty of global economic development increased. In the face of the spread of epidemic situation at home and abroad and the severe political and economic situation, around the annual business plan, the company actively takes effective measures to ensure the protection and safety of all employees, at the same time, take many measures to promote the resumption of work and production, strive to maintain the orderly recovery of production and operation, and reduce the impact of the epidemic on the company’s performance.

During the reporting period, the company actively invested in the construction of digital workshop and intelligent chemical plant. Through cooperation with colleges and universities, the introduction of international advanced production equipment and independent research and development, the company’s digital production level has been continuously improved. The company cooperates with colleges and universities, and through continuous technical research, develops the laser cladding 3D printing additive manufacturing technology for bearing shell alloy layer, which successfully solves the problem of low bonding strength between Babbitt alloy and iron base, making the company the first domestic enterprise to mass produce sliding bearing by using Babbitt alloy 3D additive manufacturing technology.