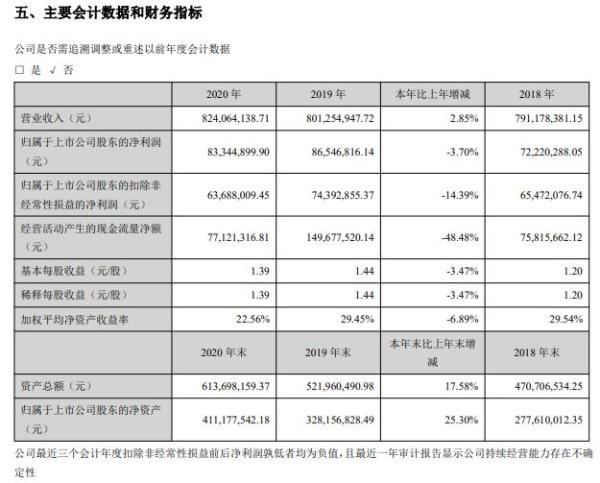 During the reporting period, the net cash flow from operating activities was 77121316.81 yuan, and the net assets attributable to shareholders of listed companies were 411177542.18 yuan by the end of 2020.

During the reporting period, the company actively responded to the impact of COVID-19, scientifically and rationally formulated procurement and production plans, increased revenue and expenditure, managed efficiency and achieved steady growth in operating revenue. In 2020, the company realized an operating revenue of 824064100 yuan, a year-on-year increase of 2.85%; and realized a net profit of 83.3449 million yuan attributable to shareholders of listed companies, a year-on-year decrease of 3.70%. The company’s profit declined slightly. On the one hand, due to the impact of foreign epidemic, some customer projects were delayed in delivery; on the other hand, due to the sharp appreciation of RMB in the reporting period, the exchange loss was 9.348 million yuan, compared with 950900 yuan in the same period of 2019, which had a certain impact on the company’s net profit.

The company has been engaged in touch control and LCD industry for many years, and has established a market development team with sales experience and professional knowledge, which has strong market competitiveness. During the reporting period, combined with the macro situation, industry development trend and the company’s own advantages, the company, on the one hand, ploughed deep into the existing customers to further enhance the scale and scope of cooperation; on the other hand, actively explored new customers and new businesses, optimized the customer structure, and achieved good results.

According to digbei.com, Akita is mainly engaged in the R & D, design, production and sales of LCD and touch products. Its main products include monochrome LCD, monochrome LCD module, color LCD module and capacitive touch screen.