From June 1, 2021, Tianjin, Chengdu and Suzhou will pilot the electronic driving license of motor vehicles. On May 10, the Ministry of public security held a press conference and issued 12 convenient measures to deepen the reform of “deregulation, management and service” in public security traffic management, including the pilot implementation of electronic motor vehicle driving license.

Beijing Business Daily reporter noted that before, Yunnan, Liaoning and other places had implemented the electronic driver’s license, but the scope and scene of use were relatively limited. Liu Yupeng, deputy director of the traffic control bureau of the Ministry of public security, said that electronic driving license and paper driving license have the same legal effect. It is planned to be popularized all over the country in 2022. 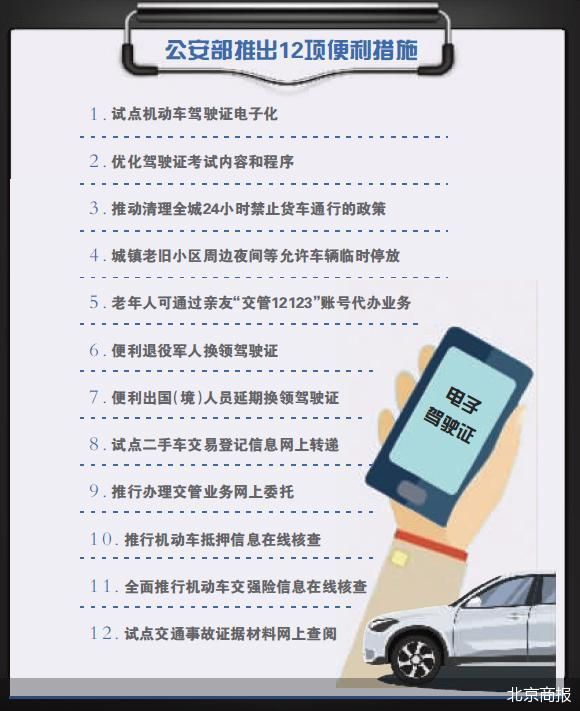 Liu Yupeng said that the electronic driver’s license is unified across the country and issued through the national traffic control 12123 app, which has the same legal effect as the paper driver’s license. Dynamic display of driver’s license, permitted driving model change, traffic violation score and other status.

In terms of application methods, drivers in Tianjin, Chengdu and Suzhou can log in to the personal account of “traffic management 12123” app to obtain the e-driver’s license. When applying for the e-driver’s license, they should submit their e-license within 6 months within the validity period. Beijing Business Daily reporter login 12123 app found that the relevant business has not yet been carried out.

“The electronic driving licenses issued by the three pilot cities are valid nationwide.” Wang Guoqiang, deputy director of the vehicle and driver management department of the Traffic Management Bureau of the Ministry of public security, stressed.

In accordance with the principle of “pilot first and gradual expansion”, the Ministry of public security will select some places to expand the pilot in the second half of the year on the basis of the pilot, and promote it in the whole country in 2022.

In addition, as for the driver’s license test, from June 1 this year, subject 2 of the small automatic car driver’s license test will cancel the project of “ramp fixed-point parking and starting”, and the interval of subject 3 will be adjusted from 30 days after passing subject 1 to 20 days.

There have been local pilot projects

“The electronic license will improve the efficiency of government service, reduce the cost of public service, and embody the quality standard of humanized service.” Independent economist Du Meng thinks. In recent years, the traffic control department has continued to promote the computerization of certificates, such as the annual inspection standard and insurance standard. In 2020, the country will fully implement the electronization of motor vehicle inspection marks. At present, 370 million vehicle owners have been issued with electronic certificates of inspection marks.

Information security to be solved

“It’s not just the driver’s license, it’s worth waiting for all the documents to enter the mobile phone. For example, in the future, you can use the ID card in your mobile phone to take high-speed rail or stay in a hotel. At present, the biggest problem is information security. ” Ye Qing, a professor at Zhongnan University of economics and law, told Beijing business daily.

Liu Yupeng also said at the press conference that safety is a major feature of electronic driving license. The digital signature anti-counterfeiting technology can effectively prevent tampering and forgery, and ensure the authenticity, uniqueness, safety and reliability of the electronic driver’s license.

It is mentioned that we should strengthen the security monitoring of important systems and key links such as electronic license, unified identity authentication and online payment. Improve the security protection ability of each platform and system, check and fill the security loopholes, and make disaster recovery backup. Establish and improve the confidentiality review system, strengthen the protection of important data involving state secrets, business secrets, personal privacy, and improve the level of information security support and risk prevention ability.

In the process of implementing e-license, local governments also pay attention to information security. For example, Hu Yanan, deputy director of Hubei provincial government administration office, once said: “we have taken a series of security and technical preventive measures to ensure the security, authenticity and integrity of electronic licenses. Without my authorization and consent, any department has no right to access, consult and retain the electronic license. The security of the electronic license is guaranteed and will not be copied and seen at will. “

However, how to ensure information security needs to be further improved by laws and regulations. Beijing Business Daily reporter noted that in the field of technology, the information security of electronic license is also constantly advancing. For example, the pilot application of “blockchain + electronic license” in Beijing was settled in Dongcheng District, Xicheng District and Shunyi district last year. It is understood that “blockchain + electronic license” is one of the important applications of Eid digital identity chain. Eid is a network electronic identity issued to citizens by the “citizen network identity recognition system”, which can identify the identity online and remotely without disclosing the identity information.