Last November, Apple released the M1 chip, which caused quite a stir in the PC industry. At that time, a lot of Apple fans called Intel one after another, hoping that Intel would make a statement. Now, after a few months of silence, Intel has finally released its views on Apple M1. There are a lot of dry goods. Interested friends can have a good look.

At the beginning of the article, the author first cooled the Apple fans: through a series of rigorous tests, including productivity test, game test and software compatibility test, Intel found that Apple M1 chip is not as good as many people think in the practical application process!

In terms of productivity, Intel has conducted a series of tests, comparing Apple’s M1 MacBook Pro with the 11th generation tiger Lake i7.

The first is two software application tests. One is the web xprt 3 web browsing performance test, which runs on Chrome browser. The other is Microsoft Office 365, which is often used by computer users.

Note that chrome and Microsoft Office 365 are both natively supported in Apple system, and they are not converted through Rosetta, so there is no performance loss on apple.

As you can see, in the webxprt scenario, Intel has a lead of more than 30%. If you look at the sub items, like photos, Intel basically has three times the performance lead.

In office 365 applications, Intel selects several working scenarios that you often use, such as converting PPT to PDF, and doing some calculations in Excel. You can see that Intel’s performance is more than three times that of apple. On average, they are basically in the range of two to three times.

Based on this, you can see that the 11th generation tiger Lake processor has a great performance advantage compared with Apple’s M1 when it carries out a series of daily work in the same two software applications. 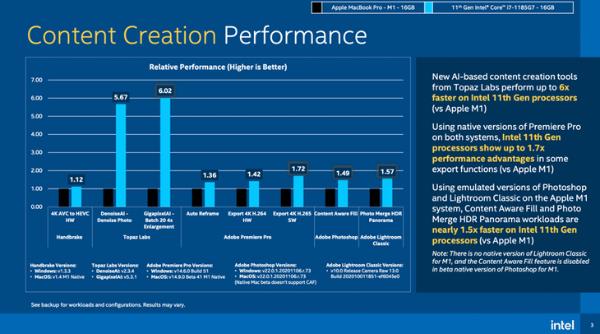 Handbrake this software, do is from 4K AVC to hevc HW transcoding. You can see that in this scenario, Intel 11’s tiger lake has more than 12% performance improvement than Apple’s M1.

Topaz labs software is mainly used in some AI scenes, such as reducing the noise of photos and increasing the size of photos. In this regard, the AI performance of Intel’s 11th generation tiger lake has a great place to play. Tiger lake is six times ahead of Apple M1.

Let’s take a look at Adobe Premiere, a video editing software. Intel also tested three scenarios, including hardware transcoding of 4K H.264 and so on. It can be seen that Intel’s 11th generation tiger lake is up to 72% ahead of Apple M1.

In addition to Adobe’s Photoshop and Lightroom, Intel also has more than 50% lead.

When Apple released the M1 chip, they released some endurance data, including 15 hours and 18 hours. When Apple was doing this endurance test, it was particularly mentioned that the brightness of the screen was 8 squares up from the lowest brightness. What’s the concept? It’s basically 125nits. At this time, the screen is very dark. In many cases, users can’t see clearly what is displayed on the screen. 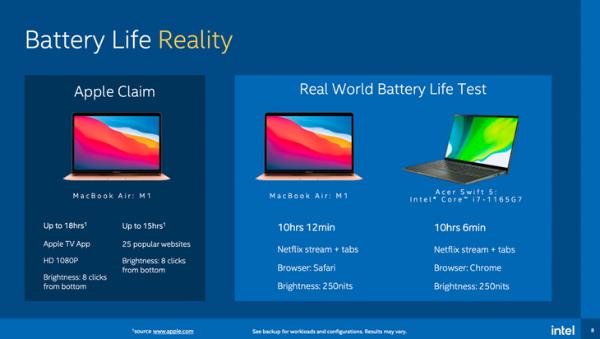 So, Intel compared Apple’s MacBook Air with Acer’s swift 5 for testing. Intel first put the screen at 250nits, which is the brightness that we often use in our daily life. Second, browser uses chrome on windows products and safari on apple, because Safari will optimize apple better. At the same time, what we do is watch the video stream on Netflix and open several different websites to test at the same time. In this way, the battery life of the two machines is basically similar, which is a little more than 10 hours.

Competition ecology and compatibility, Intel is obviously stronger than apple!

Apple is a relatively closed ecosystem. In contrast to Intel, in fact, Intel produces many systems every year, with hundreds or thousands of different products. Only a few of them are listed. We can look at them from several aspects. 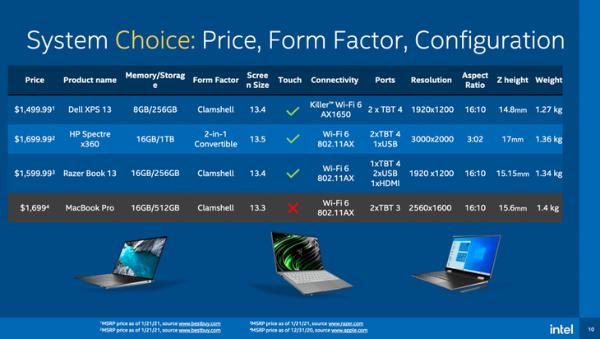 First of all, from the perspective of price segment, the product price segment provided by Intel is very large, and customers can have different choices according to their different needs. For example, Apple’s MacBook Pro costs $1699. We put three products at this price, and there are many other products.

Secondly, in terms of form, Apple has only traditional laptops. On the Intel platform, we give OEMs and end users more choices. They can make traditional laptops or two in one laptops, including yoga, which can rotate 360 degrees. From the choice of size, you can have more. 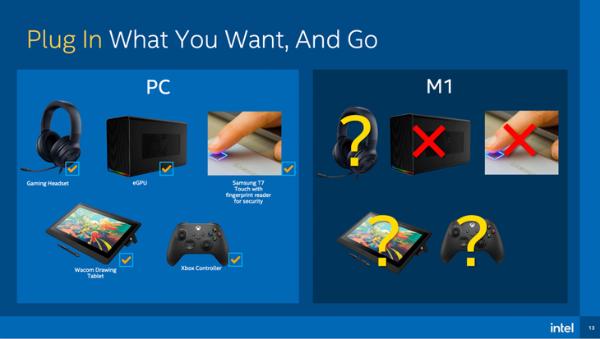 Because Intel is building a completely open ecosystem, and has been working in this ecosystem for so many years, all kinds of peripherals can basically be used to connect to any Intel platform machine, and basically work. On Apple M1, for example, the graphics dock connected by lightning doesn’t work, and the fingerprint reader doesn’t work. For example, the external headphones, handles, and writing boards work and don’t work. So you have to think about what kind of peripherals you want to connect. In particular, the existing peripherals that you already have at home or in your studio may have worked on the Internet version of MacBook, but now they may not work on M1. Of course, this is a problem of compatibility, which may be at the software level or the hardware level. In the future, the partners of the ecosystem may change gradually, but it will take some time. However, from the partners of the ecosystem, some products are old products. They may not be able to maintain or support these old products. That is to say, the peripherals you have bought may not work in M1 products in the future. You need to rebuild them Go and buy it. 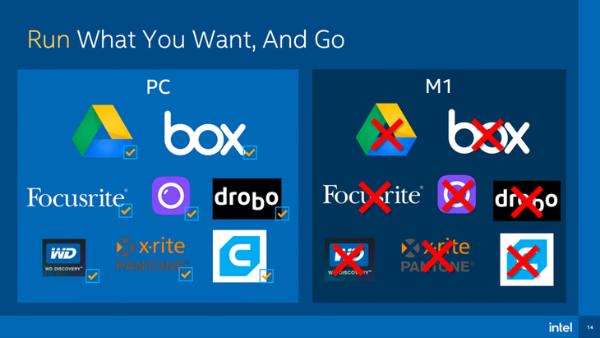 In fact, both Intel and apple are very focused on manufacturers who actually own the experience. On the mobile PC platform, Intel has a big advantage over apple, that is the Intel Evo platform. 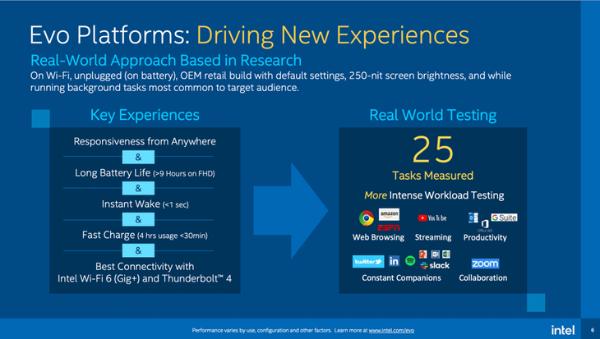 Evo platform is to let everyone have a new experience on PC. Intel’s approach is based on some detailed research in the real world, mainly including fast response, long battery life, fast wake-up, fast charging (in the case of fast charging, 30 minutes charging can be used for 6 hours), and better connection (including wi-fi6 and lightning). In the whole test, Intel is divided into several major scenarios, including surfing the Internet, watching video streaming, working (including watching office, etc.), social software and remote collaboration software. In Evo testing, many scenarios are used by users in daily life.

For the majority of consumers, to see the mobile PC with “Intel Evo platform certification” brand sticker, you can rest assured to buy it. It represents the high-end, represents that this mobile PC has today’s super class performance, and is Intel’s carefully selected productivity tool for consumers.

If we measure Apple M1 with Intel Evo platform certification standards, we will find that many test items of Apple M1 are unqualified. For example, in office outlook, the transition from Outlook to calendar is about 50% slower than Evo’s performance requirements. In addition, what we do a lot is video conference. If we use zoom, we use M1. According to Evo’s test standard, it will be 31% slower than our standard. In addition, for example, if you choose a picture in PowerPoint, M1 is also unqualified. Therefore, the evo platform, if the product is labeled with Evo certification, then the product has gone through very strict testing, to ensure that everyone in the real world, often used scene response speed is very fast.

Editor’s comment: good hardware with good software can bring excellent experience to computer users. Intel has done very well in this respect. For Apple M1, I think its hardware design is also great, but in terms of software supporting, Apple really lags behind Intel a lot. Frankly speaking, without good software support, no matter how good apple M1 is, its actual ownership experience will be greatly reduced.

All in all, on the mobile PC platform, the comparison between Intel tiger Lake processor and apple M1 is more like the comparison of the comprehensive strength of Intel and apple. After all, Intel has dominated the PC market for so many years, and apple is not a rival at present!