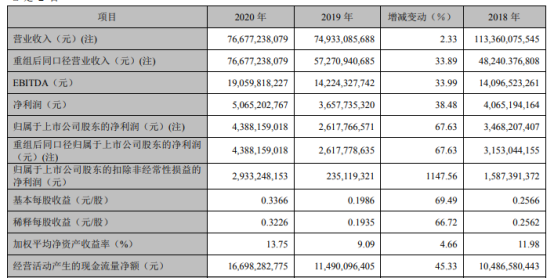 During the reporting period, the net cash flow from operating activities was 16698282775 yuan, and the net assets attributable to shareholders of listed companies were 34107795454 yuan by the end of 2020.

TCL Huaxing, through its extreme management ability and industrial synergy advantage, has demonstrated its industry-leading ability to resist cycle and risk at the bottom of the cycle, and its scale, share and benefit have all grown against the trend.

In 2020, central semiconductor will continue to promote the goal of leading the photovoltaic industry in the world and the silicon wafer industry in China, and carry out continuous reform around the adjustment of organizational structure, improvement of management efficiency and transformation of manufacturing mode, so as to promote high-quality development. During the reporting period, Zhonghuan semiconductor achieved a total revenue of 19.06 billion yuan, a year-on-year increase of 12.8%, and a net profit of 1.48 billion yuan, a year-on-year increase of 17.0%. The company has included it in the scope of consolidated statements in the fourth quarter of 2020.

According to the announcement, the profit distribution plan of the company approved by the board of directors is as follows: 13546581599 shares that can participate in profit distribution on March 10, 2021 as the base (total share capital 14030788362 shares minus 484206 shares that do not participate in profit distribution in the company’s special securities account for repurchase), It is planned to distribute cash dividends of RMB 1.2 (tax included) to all shareholders for every 10 shares, with a total profit of RMB 1625589791.88 and the remaining undistributed profit of RMB 7145804477.12, which will be carried forward for future annual distribution. In this year, no bonus shares will be given and no capital reserve will be converted into share capital. If the total share capital of the company changes before the implementation of the distribution plan due to convertible bond to equity swap, share repurchase, equity incentive exercise, refinancing new shares listing and other reasons, the corresponding adjustment shall be made according to the principle of “the distribution proportion remains unchanged, and the total amount of distribution shall be adjusted”, and the specific amount shall be subject to the actual distribution.