Industry insiders said that as a latecomer in the field of mobile communications, China Radio and television’s 5g layout has lagged behind China Mobile, China Telecom and China Unicom (hereinafter referred to as the “three major operators”). In the future, whether China Radio and television can find partners with the help of frequency band advantages and gain a firm foothold in the 5g commercial field will become the focus of attention of the outside world. 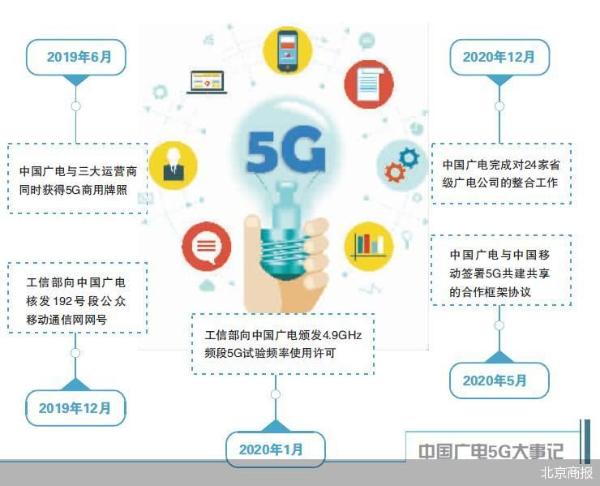 Section 192 is the exclusive 5g section of China Radio and television. In December 2019, the Ministry of industry and information technology announced that in accordance with the telecommunication regulations of the people’s Republic of China, the measures for the management of telecommunication network code number resources and other relevant laws and regulations, it will issue the public mobile communication network number of section 192 to China Radio and television.

Business is lagging behind its rivals

Statistics show that China has long adopted the development policy of radio and television at the central, provincial, municipal and county levels. Under the relatively loose management system, on the one hand, China’s Radio and television industry has developed rapidly; But on the other hand, the local cable TV network also presents a “separatist regime” situation.

Beijing Business Daily reporter noted that there are nearly 100 5g mobile phones supporting 700MHz band, covering the high, middle and low-end consumer market. It is understood that by the end of this year, China Radio and television and China Mobile will jointly complete the construction of 400000 700MHz 5g base stations.

It’s hard to be competitive in the short run

According to the data, 700MHz band is the golden band for the development of mobile communications. It has the advantages of low signal transmission loss, wide coverage, strong penetration, low networking cost, and is suitable for 5g underlying network.

As the provider of domestic cable TV services, the broadcasting system behind China’s broadcasting has a large number of content resources. Data show that China’s Radio and television system produces more than 6.5 million hours of radio programs and more than 2.6 million hours of TV programs annually, and the system produces about 500 TV plays (more than 14000 episodes) every year.