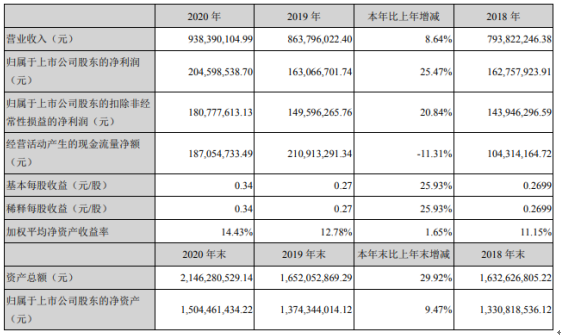 During the reporting period, the company continued to implement the production capacity of drainage pump products, at the same time, continued to improve the company’s automatic manufacturing capacity and testing level, and further strengthened the overall management and control of product quality. The production and sales volume of the innovative series of drainage pump accessories for household appliances has been continuously improved, which has effectively consolidated the company’s leading position in the global market of drainage pump for household appliances. The market promotion of the new efficient integrated drainage pump products is progressing smoothly, and the sales proportion continues to increase. With the promotion of globalization strategy and the exploration of overseas business model, the business of Thailand subsidiary has been developing steadily.

According to the announcement, the company’s profit distribution plan approved by the board of directors is as follows: with 603 million shares as the base, cash dividend of 1.1 yuan (including tax) will be distributed to all shareholders for every 10 shares, bonus shares of 0 shares (including tax) will be given, and capital accumulation fund will be used to transfer 0 shares to all shareholders for every 10 shares.

According to our data, Hanyu group’s main business is R & D, production and sales of high-efficiency and energy-saving drainage pumps for household appliances.