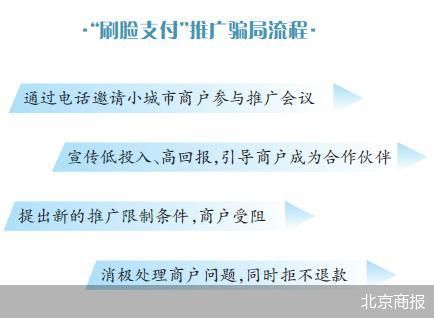 “On March 1, I attended a promotion in our local hotel and became an agent.” Zheng Xing (a pseudonym) told Beijing Business Daily that earlier, he received a strange invitation call, inviting him to participate in the wechat face payment promotion conference held by Shanxi Futai Zhongke Technology Group Co., Ltd. (hereinafter referred to as “Shanxi Futai”).

Zheng Xing said that the relevant staff of Shanxi Futai claimed to be able to obtain high profits after becoming a platform partner. “Two new merchants are added every day, and 720 new merchants can be added in a year. The average daily running water of each merchant is 3000 yuan, and a total of 777.6 million yuan can be generated in a year. According to the 0.16% profit sharing rate, the agent can get 1.24 million yuan. “.

According to the situation described by Shanxi Futai, after paying the agency fee of 25800 yuan, the agent does not need to pay other fees. Not only the payment rate of the transaction is 0, but also the cost of purchasing machines in the subsequent promotion will be borne by Shanxi Futai. Every time an agent promotes a machine, he will get 1799 yuan.

Zheng Xing was moved by this seemingly profitable investment. Later, Zheng Xing made three payments of 25800 yuan to Shanxi Futai by credit card, becoming a county-level agent. After the payment was completed, Zheng Xing found that there were many discrepancies between the on-site publicity and the actual situation, and the two machines presented could not be used normally. After reflecting this situation to the staff of Shanxi Futai, the other party proposed to re mail the two machines, but the two new machines also had problems.

Zheng Xing then proposed to contact other agents in the same city to see if it was the wrong way to use it, but the request was also rejected. Zheng Xing further found that Shanxi Futai has many restrictions on the promotion and activation of the machine, such as 15 days of continuous use, the average number of swipes per day is not less than 20 times, and the single amount is not less than 1 yuan.

It is worth noting that Shanxi Futai also proposed that only two machines can be provided for Zheng Xing at a time. Only after the two machines meet the activation conditions and are in normal use, can they be sent out again. For the problems of the first two machines, Shanxi Futai only said that it would solve them as soon as possible. Zheng Xing’s request for a refund from Shanxi Futai was rejected, and the two sides reached a deadlock.

Also in this promotion paid fees and nearly 60 years old Duan Laotai. Duan’s son told Beijing Business Daily that Duan was not a merchant herself, and she paid 7000 yuan as a deposit at the meeting. “When I got to the hotel, the promoter had already left. Contacting the other party, I just asked us to supplement the remaining money. I was very tough and asked us to sue him.”

Tang Dajie, a visiting researcher at Wuhan University, believes that this so-called offline promotion of face brushing payment is actually fraud and theft in the name of payment and has nothing to do with payment financial technology. “It is more to make use of the worship and misunderstanding of new technology of users in remote areas to illegally obtain customer information in order to obtain illegal interests.”

According to the information provided by Zheng Xing, the reporter of Beijing business daily dialed the customer service telephone of Shanxi Futai and consulted it as a user.

Shanxi Futai customer service said that the company recruited City partners. Whether they can cooperate or not depends on the number of local partners. “We have regional protection. If we are full, we can’t do it.”.

As for the relationship between Shanxi Futai and wechat payment and how to promote the machine, the customer service pointed out that Shanxi Futai is a wechat payment service provider, and the other party entrusts them to carry out business promotion. Information such as the price of the machine can be inquired on the official website of wechat payment. The company will debug all the machines before they are sent out, so that they will not be unable to use. However, customer service didn’t mention the fact that only two machines can be sent at a time.

Zheng Xing also showed the use of payment equipment provided by Shanxi Futai to Beijing business daily. The words “wechat payment” appeared on the base of the machine, and no matter it was code scanning payment or face brushing payment, it could not be used normally. At the same time, Zheng Xing also mentioned that the staff of Shanxi Futai had proved that it was a wechat payment service provider through some official websites of wechat payment, and repeatedly mentioned that it was entrusted by wechat to develop new users.

A reporter from Beijing business daily inquired about the information of service providers on the official website of wechat payment and found that Shanxi Futai was registered as a wechat payment service provider in August 2020. Its industries include e-commerce / group buying, education / training and digital, and its expansion regions include Hebei Province, Shanxi Province and Henan Province.

In addition to Jiyuan City, users in Neihuang County, Yima City and other places in Henan Province have reflected the situation of Shanxi Futai. In an interview with Beijing business daily, a user in Yima City said that she paid to become an agent in December 2020, not only the machine could not be used, but also the customer service was half lost. Several local merchants who were cheated united to find the team of Shanxi Futai before the Spring Festival, and took the opportunity to recover 21900 yuan.

For the user feedback of this information, Beijing Business Daily reporter to wechat payment for verification, also sent an interview letter to Shanxi Futai, but as of press release has not received a reply from both sides.

Su Xiaorui, a financial technology expert, believes that from the actual situation, such companies often select some small cities and counties for “hunting”. On the one hand, they attract users’ attention with high returns; on the other hand, they bring users a sense of urgency with “limited quota”; on the other hand, they use the head platform as endorsement, so users who do not know the specific situation are easy to be cheated.

How to solve the problem of compliance promotion

Beijing Business Daily reporter combed found that the user mentioned above is not a case, at present, many companies are playing the banner of WeChat payment, Alipay and other head payment agencies, the face payment agent, after losing the user agency fees, machine fees, lost or unable to fulfill commitments, ignore the paid merchants.

In the cooperation agreement provided by Zheng Xing and others, Beijing business daily noted that the rights and obligations of both parties were not clearly stated in the agreement, especially in terms of machine rates and promotion rules. Zheng Xing is even more straightforward. When Shanxi Futai gave two faulty machines, the so-called promotion business got stuck in the first pass, that is, the user spent 25800 yuan to buy two machines that could not be used.

Su Xiaorui pointed out that the operation for the promotion of “face brushing payment” is the same as the fraud in the fields of virtual currency and stock recommendation, which attracts users with low investment and high income. For this kind of situation, especially for some behaviors such as recruiting agents and paying dues under the banner of new concepts, users should be more vigilant and keep their money bags.

Zheng Xing also admitted that as a merchant, he did not know what kind of impact the establishment of face payment could have. What he was more interested in was the high return promised by the promoter. He did not expect that he would fall into the “trap” in the end.

On the other hand, in addition to the scam around “face brushing payment”, a reporter from Beijing business daily asked many users who have used face brushing payment to understand that at present, ordinary users’ worries about face brushing payment are mostly concentrated in the payment stage, and they are worried that face recognition is too fast to confirm the transaction amount, resulting in unnecessary expenses. We don’t know about the potential risks of the platform in collecting and saving users’ facial biological information.

Zhang Kun, an expert in the financial technology industry, said that compared with other data, the leakage of biometric data such as face data is irreversible, irreversible and prone to greater harm. Ordinary users should also keep their own information properly and provide mobile application authorization and sharing information carefully.