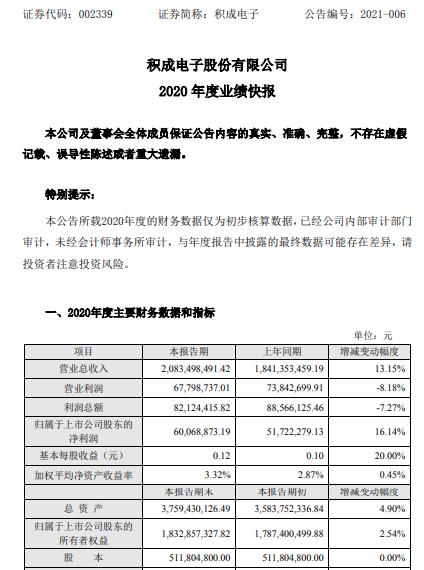 According to the announcement, Jicheng electronic’s total assets were 3759430126.49 yuan, an increase of 4.90% over the beginning of this report period, and its basic earnings per share was 0.12 yuan, compared with 0.10 yuan in the same period of last year.

During the reporting period, in the face of the impact of the epidemic and the complex economic situation, the company took measures to actively respond. On the one hand, we should seize the time to resume work and production, seize the opportunity of the country to increase infrastructure construction, and actively explore the market. On the other hand, by strengthening internal management, increasing revenue and reducing expenditure, improve the overall operational efficiency. During the reporting period, the company’s operating revenue and net profit attributable to shareholders of listed companies increased.

During the reporting period, due to the market environment, capital and other factors, some of the joint-stock companies were in poor operating conditions. Out of the principle of prudence, the company carried out accounting treatment according to the regulations, which had an impact on the overall operating indicators of the company.