With the rapid development of science and technology, a number of high-quality Chinese brands that had been ready to develop have sprung up, showing their vigorous vitality.

In the words of well-known marketer Yang bubing: “this round of brand innovation is different from the past, in terms of product quality and sales price, it can positively PK international brands. Domestic brands and international brands began to compete together. “

Some of them have found new ways and some have accumulated a lot of experience. Two years ago, tokit kitchen, a high-end Internet kitchen electricity brand, was born in Shanghai. Relying on the deep technology and strength accumulation of pure rice technology, a Xiaomi ecological chain enterprise, once it was launched, it quickly occupied the user’s mind of the high-end kitchen electricity market with “high appearance, fine technology, full intelligence, and deep innovation” and opened up new markets in many aspects It is the first in the industry.

“Quality” is not just a product

As one of the eternal standards, “quality” is the key word repeatedly emphasized by many brands. However, most brands’ understanding of “quality” only stays at the level of “product quality”, and they have no deep understanding of the quality of “user experience”.

Tokit is totally different. In pure rice with strong engineer genes, tokit kitchen table has the opportunity to run through hardware, software, content and services with design thinking, so that users have the opportunity to experience a unified and smooth use experience.

For the tokit intelligent electric oven, which has been out of stock for many times, its outstanding hardware is very obvious.

For example, when an ordinary oven is working, there will be a heat wave when it is a little close to it, while the tokit oven adopts a fully enclosed sealed door and triple insulating glass, which can firmly lock the heat, keep the temperature in the oven chamber stable and uniform, and reduce the risk of scalding.

For another example, in order to save the horizontal space of the kitchen, tokit oven longitudinally stretches the furnace cavity and adopts a vertical structure, which saves the table space with the same capacity. And to the upper and lower heating tube and food materials to retain a sufficient distance, let the oven temperature more uniform. The bottom M-type heating tube is hidden in the bottom of the furnace cavity, which is better and easier to clean than the traditional exposed heating tube.

What fans like to talk about most is its built-in high-definition wide-angle camera. Technically speaking, the temperature difference inside the oven is 300 degrees, which is similar to that of the lunar rover. The temperature difference between the lunar rover and the oven is also 300 degrees. You have to be able to take photos, upload 1080p video directly to the cloud, and compress it in the cloud. Every step is very difficult.

But this amazing design for users is not simply “show muscle”, but bears more important responsibilities. The wonderful video captured and compressed by the camera can be directly synchronized and shared to the social platform to easily harvest topics and likes, and become one of the fun of cooking.

As far as the cooking process itself is concerned, the experience of tokit kitchen table is also remarkable. Or this camera, not only can output video, but also support app “live”, users can observe the whole process of food dancing in the oven through the mobile phone, and control the cooking progress at any time. Tokit app of the same name can also record your “taste” and become more and more familiar with you; punch in oven fancy play, and share fun with food lovers in the “shooting area”, let alone baking life.

Yang Hua, CEO of pure rice technology, once said that the kitchen space is an excellent place to create beauty, convey feelings and broaden the scope of social interaction. This kind of scene is happening all the time in the daily life of young people in some developed countries. However, for young people in China, most of them still don’t know how to cook. They not only can’t find fun in the kitchen, but also begin to get tired of and stay away from the kitchen. Instead, they often eat some takeaway food from unknown sources and gradually stay away from health, which has become a very bad thing thing.

In this situation, in order to reduce the threshold of cooking step by step, improve the fun of cooking, and make cooking easier, tokit kitchen table has achieved the ultimate in both hardware product quality and user experience quality, as if every detail is inviting users to try it out, truly demonstrating that “good products speak for themselves”.

Touch the kitchen of the future

If the built-in camera in the oven and intelligent assisted cooking are only the first steps of the “future kitchen”, what else can tokit kitchen do on the way to the ultimate form of the future kitchen? 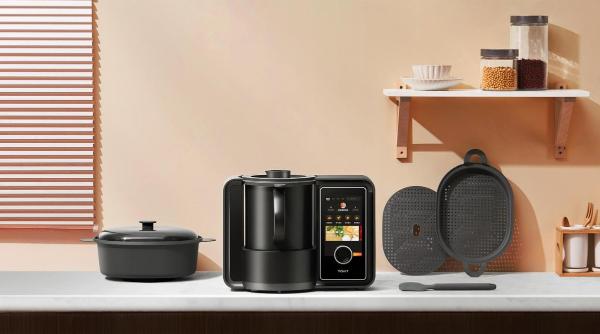 The reason why it is called “multi-functional cooking machine” is that it really integrates the functions of 21 kinds of kitchen equipment, saves a variety of kitchen electricity costs and greatly saves floor space. It makes an interesting combination of these functions. It comes with 10 kinds of cooking modes, no matter how to deal with the ingredients such as chopping, kneading, juicing, mincing, grinding, or stewing, steaming, etc.

Grind the delicate rock sugar powder in 20 seconds, knead the smooth dough in 2 minutes, and make sweet and sour pork ribs in 15 minutes Because tokit kitchen table AI multi-functional cooking machine undertakes most of the complex processes, cooking has changed from a complex systematic work to a “basic operation” of following the video recipes, and the taste is no worse than that of a chef. The whole process with 8-inch color touch screen and ring button, click, experience comparable to tablet computer. If the hand is occupied, it also supports AI far-field voice interaction. Through the “small C, small C” wake-up device, you can use voice to easily control multiple functions, and cooking becomes a mouth moving thing.

Of course, as an “evolutionary” kitchen power, it’s not just a hardware product, nor is it just an upgrade of intelligent experience. In order to let users experience the fun of cooking more directly, it directly puts forward the concept of “future kitchen” integrating social functions.

In fact, due to the strict requirements on technology, quality, performance, interaction and other aspects, the products of tokit kitchen table have a very obvious feature: the real object is more beautiful than the photos, the touch is more textural than the viewing, and the experience is more amazing than the touch. So before the release of cooking machine, tokit kitchen table had more than 200 offline stores.

With the advent of new products, tokit has launched the “kitchen of the future” project, creating the offline experience store of tokit kitchen. The integration of scientific and technological elements with daily diet, leisure and entertainment, cooking classroom and other consumption scenes will create a three-dimensional, humanized and intelligent food and social environment to provide convenient solutions for young people’s intelligent life.

At present, tokit future kitchen has become a new place for young people to experience cooking.

It can be said that in just two years of development, tokit kitchen has achieved two leaps in succession, from small kitchen appliances to magic tools, from high-quality kitchen appliances to future flagship, gradually depicting the development outline of “future kitchen”. The present is the starting point of China’s innovative brands. Chess players see more than three moves. Only by focusing on the future and based on the present, can they better take their own evolutionary road, as is the case with tokit kitchen table.