&With the continuous warming of migratory bird economy, more and more enterprises begin to seek the silver economy. On March 25, Air China (hereinafter referred to as “Air China”) launched the “care for the elderly rights card” for sale. Not only that, in recent years, there have been airline companies trying to squeeze into the elderly market, and many airline companies such as China Southern Airlines have even made the idea of elderly meal. In this regard, some industry experts pointed out that the elderly market may not be as beautiful as the aviation enterprises imagine, and it may be difficult for enterprises to fully meet the needs of the elderly in a short period of time. The launch of the old version of “xinxinfei” can make a wave of “good impression” for aviation enterprises, but how much increment it can bring in revenue remains to be seen. 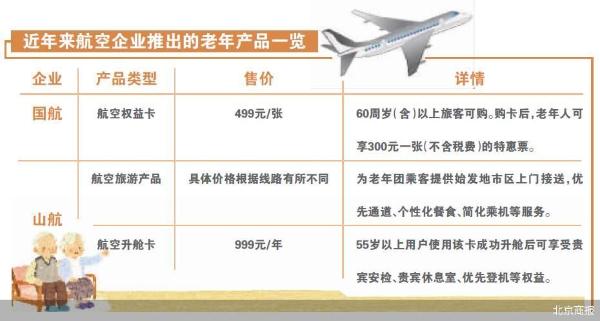 Under the impact of the epidemic situation, aviation enterprises with severe survival situation have started business with the elderly one after another.

As a leading enterprise in the field of domestic civil aviation transportation, Air China has launched the elderly version of “xinxinfei” products for the elderly, showing its ambition to compete for the silver hair market. According to the product introduction, the senior citizen’s rights and interests card sold by Air China is 499 yuan per card, which is sold to passengers aged 60 or above. After purchasing the rights and interests card, the elderly can buy the designated ticket at the price of 300 yuan (excluding taxes) for unlimited times within the validity period.

Air China customer service staff further disclosed to Beijing Business Daily that the inventory of the rights and interests cards sold this time is 20000, and the surplus is still sufficient as of the afternoon of the opening day. However, for the specific sales situation of this card and whether it will provide special after-sales service for the elderly customers, Air China staff said that there is no more information to reply.

Beijing Business Daily reporter found that, similar to the conventional “xinxinfei” series of products, there are some restrictions on the use of “respect for the elderly rights card”. Specifically, the card is valid for less than one year from the date of purchase to December 26, 2021. Among them, April 30 to May 2 and September 29 to October 2 are unavailable dates.

In addition, if the ticket purchased by using the “old people’s rights card” is refunded voluntarily, the tax can only be refunded and included in the number of times of use, and it is not allowed to sign the ticket voluntarily or involuntarily. At the same time, the card requires 5-15 days in advance to check the remaining tickets and order tickets.

A few hours after the sale, a reporter from Beijing business daily interviewed Ms. Wang (pseudonym) who successfully bought the card. She said she had logged into the Air China app long before the sale and was ready to grab two rights cards for her parents. However, when buying the card, Ms. Wang found that one of the necessary conditions for buying the card is that the old people need to register as Air China Phoenix bosom friend members, and they need their own mobile phones to cooperate with the operation, so it is difficult for the old people to complete it independently. At the same time, using the rights card to book air tickets requires at least five days in advance to choose the available routes and time, etc. for the elderly consumers who are used to “acting” by their children, it also really needs a process of adaptation. However, some consumers told the Beijing Business Daily that for the silver haired people who are willing to go out and walk more and provide for the elderly like migratory birds, the unlimited number of special tickets is still “really fragrant”.

In fact, Air China is not the first one to do business with the elderly.

However, in previous years, the elderly aviation products are still relatively “implicit”. In 2013, Shandong Airlines (hereinafter referred to as “Shanhang”), which released the middle-aged and elderly product line “Cixiang”, takes tourism as the main entry point. A person familiar with the matter disclosed to the reporter that according to the investigation conducted by Shanhang at that time, it was inconvenient for the elderly to arrange their own travel. The airline and the travel agency cooperated to design tourism products for the elderly, hoping to enter the market with insufficient supply more efficiently.

After “xinxinfei” products are put into the market, aviation enterprises also have new ways to attract elderly customers. At the end of last year, Shandong Airlines put on sale the “Cixiang business class upgrade annual card” for 999 yuan. According to the people familiar with the matter, next, Shanhang will continue to cultivate the elderly market, and plans to launch related activities and products from May this year.

Wang Jiangmin, senior economist of civil aviation, told Beijing Business Daily that in fact, more than ten years ago, some airlines had “taken a fancy” to the silver customers with huge potential, but at that time, most of the breakthroughs of airlines were concentrated on tourism.

However, it is different now. Today’s silver group has become an important consumer power that can not be ignored by any industry. According to public information, during the recent peak period of “migratory bird” travel (November 1-4 last year), China Southern Airlines’ Harbin Sanya flights transported nearly 2000 passengers, an increase of 31.5% over the same period of last year, in which the number of elderly passengers increased significantly.

In 2018, Civil Aviation Administration of China and national development and Reform Commission jointly issued the price behavior rules of Civil Aviation domestic transport market, which proposed to encourage air transport enterprises to give preferential treatment to the elderly and other special consumer groups, and the specific preferential measures should be formulated by air transport enterprises themselves.

Under the stimulation of multiple factors, airlines have finally come to the stage, ready to compete with entrants in various fields on the silver economy track.

How big is the aging market? According to relevant statistical data, it is estimated that during the “14th five year plan” period, China’s elderly population will exceed 300 million, from mild aging to moderate aging. However, the sunrise economy, which seems to be “big and beautiful”, is faced with such practical problems as limited customer group transformation for aviation enterprises.

Some people in the civil aviation industry told Beijing Business Daily that at present, it is difficult for many elderly people to use intelligent devices to book tickets for themselves. If they travel alone, they may also face difficulties in handling check-in and consignment. At the same time, the elderly also have high requirements for seat width, service, meals and so on. Some people still need to take medicine on time. In this regard, Zheng Zhigang, a postdoctoral fellow in the Department of Sociology of Peking University and director of the aging industry research center of the Eurasian System Science Research Association, said frankly that whether the elderly can fly is largely affected by their physical condition.

In this regard, Zheng Zhigang pointed out that if aviation enterprises want to expand the elderly market, their target customers need to be further subdivided, such as those under 75 years old. “At the same time, enterprises can also make some optimization in food and other aspects, and set up some green channels, waiting rooms, etc. for the elderly groups, so as to adjust the service to suit the aging,” Zheng Zhigang said. “In addition, airlines can also cooperate with some suppliers to supplement the derivative services with concentrated demand such as pick-up and drop off flights, and carry out more market-oriented product design.”

Wang Jiangmin also pointed out that there is still room for exploration in the elderly market, but airlines need to pay more attention to the actual needs of the elderly when developing products. In addition to products, supporting services should also keep up, and ensure comfort on the basis of improving cost performance. However, he also said frankly that although airlines have some services for specific groups, such as “unattended travel” for children, the base number of such services is very small. If new projects for the elderly are added, it is also a test for airlines to balance their cost investment. Therefore, it remains to be seen whether the elderly will pay for the new products and how well they will be accepted by the market.