The civil aviation industry, which has been suffering for a long time under the epidemic situation, is finally waiting for an excellent opportunity to recover. From March 28, CAAC began to implement the flight plan for the summer and autumn season of 2021. According to the data of Civil Aviation Administration, there are 54 new routes in summer and autumn of 2021, among which not only the three major airlines have added some hot routes for tourism and business travel, but also Spring Airlines, Jiuyuan airlines and capital airlines have become the “dark horse” in the eyes of the industry by virtue of the newly opened independent routes or Beijing Shanghai and Beijing Guangzhou routes. Xinhang season, which has important travel nodes such as Qingming, may day, summer vacation and November, is bound to become the battlefield for domestic airlines to start the recovery war after the epidemic. 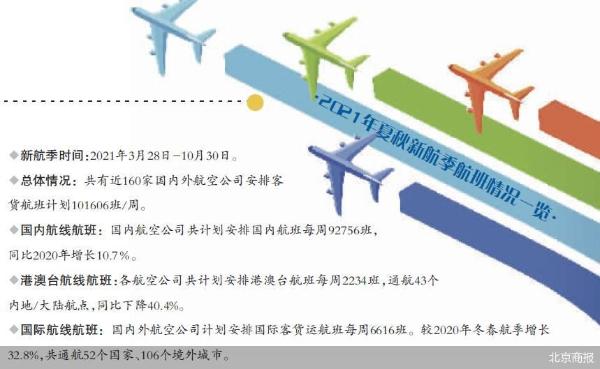 The turning point is coming

After the severe impact of the epidemic, the civil aviation industry attaches great importance to the SIA season, which has many travel peaks and peak tourism seasons. Some people even call it the long-awaited “turning point”.

In order to seize the attractive travel market cake, the airlines of SIA have arranged and increased the popular routes in advance. Specifically, Air China will increase investment in domestic routes around Qingming and may day, mainly including Hainan Island, East China, West China and other traditional tourism hot spots; China Eastern will open 33 new routes from Kunming to Jinggangshan to Shanghai Pudong, Ordos to Taiyuan to Shanghai Hongqiao; China Southern will open 29 new domestic routes, including Ningbo to Lhasa, Hangzhou to Haikou, Harbin and Hefei The route from Hefei to Nanning and other hot tourist destinations.

Beijing Business Daily also learned from China United Airlines that during the new air season, the airline arranges 99 routes, and Daxing airport operates 64 routes, including 46 independent routes, with 230 flights per day. Moreover, according to the market demand, China United Airlines has also optimized some routes, opened 11 routes such as Daxing Lvliang Nanchang, Daxing Wulong Foshan, and restored 7 routes. In addition, Shenzhen Airlines also announced that in the summer and autumn of this year, Shenzhen Zhengzhou Datong, Guangzhou Lijiang, Guangzhou Pudong and other round-trip flights will be added, and the frequency of Shenzhen Pudong and Shenzhen Sanya flights will be increased.

“The recovery of the aviation season in summer and autumn of 2021 is relatively ideal.” Wang Jiangmin, senior economist of civil aviation, said, “from the situation that airlines choose new and encrypted routes this time, we can see that although many airlines are greatly affected by the epidemic situation, they have been preparing for the market to recover. Only in this way can they start business quickly in SIA season.”

In fact, it is not difficult to see from the new season flight plans of various airlines that in the face of severe survival situation, not only the leading enterprises have shown their determination to actively compete for the market, but also many small and medium-sized airlines have begun to take the initiative to enter the hub airport.

According to the latest notice issued by the Civil Aviation Administration, in the summer and autumn of 2021, Jiuyuan Airlines won the “admission tickets” from Beijing and Shanghai for the first time, and obtained the business licenses of several departure routes from Guangzhou. As a result, Jiuyuan airlines, a low-cost airline, officially operates the routes from Beijing to Guangzhou and from Shanghai to Guangzhou, with an initial frequency of 14. Capital Airlines, a subsidiary of HNA, has also obtained business licenses for popular routes from Beijing to Guangzhou and Chengdu. According to Qi Qi, a senior expert in civil aviation, the introduction of small and medium-sized airlines into the routes of first tier cities is also a way for relevant departments to support low-cost airlines and promote market differentiation. With the market supply gradually returning to normal, small and medium-sized airlines can attract more customers through their own cost advantages, enrich the supply types, and are likely to become the “dark horse” in the market of SIA.

In the view of the industry, affected by the epidemic situation, at this stage, the operation focus of airlines is still on domestic flights. In the accelerated dense route network, the express line with the hot tourist cities in the South as the destination has become the main direction for many airlines this year.

For example, Shenzhen Airlines and Air China jointly launched the “City Express” between Shenzhen and Beijing and between Shenzhen and Chengdu, with 20 flights between Shenzhen and Beijing and 13 flights between Shenzhen and Chengdu every day. In addition to the above-mentioned two express lines, Air China also said that it plans to upgrade and build the brand of express line on Beijing Shanghai, Beijing Chengdu, Beijing Hangzhou and other routes; China Eastern Airlines has also encrypted seven express lines in Beijing, with more than six flights per day from Daxing to Guangzhou, Shenzhen, Chongqing, Chengdu and other routes; the daily average planned flights of the hub express line from Hongqiao Airport to Beijing, Shenzhen, Guangzhou and other places are 542.7, Compared with the previous flight season, the number of flights per day increased by about 21, and the planned volume of express lines has accounted for 71.25% of the total planned volume, further increasing by 2.09% compared with the previous flight season.

It is worth noting that in the route network of SIA season, Nanchang, Ganzhou and other cities with relatively concentrated red tourism resources are also paid close attention by airlines. For example, the Zunyi route of Pudong Airport has increased from the original 1-2 flights per day to 4 flights per day, which has become the fastest flight encryption point during the season. In this regard, the heads of several travel agencies that have maintained cooperation with the airport told Beijing Business Daily that the demand for red tourism has soared this year, tourism service providers have launched many products with the theme of red tourism, and the additional flights in SIA season also provide consumers with more choices.

Who is the winner when the competition intensifies

With the resumption of the suspension of air routes and the opening of new popular air routes, the recovery of the civil aviation industry is in full swing.

“The new routes are the result of the surge in market demand. For the civil aviation industry, summer and autumn is the peak season, and the demand in July, August and September is the most concentrated. In addition, the Qingming, may day and November holidays will further form a new travel boom. ” Wang said, “the encrypted flights and express lines make the day round trip between different cities more convenient. Moreover, the current domestic business demand is accelerating recovery, and the SIA season is indeed a good time for domestic business recovery.”

However, a number of experts have said frankly that China’s civil aviation industry is still facing many challenges, and it will take a relatively long time for it to recover. Qi Qi pointed out that at present, the business of airlines is mainly concentrated in China, but for some airlines that originally mainly fly international routes and long routes, the comprehensive recovery still needs to be supplemented by international business to a certain extent. In addition, at the present stage, the supply is accelerating to the domestic, which intensifies the competition between aviation enterprises. It may lead to a drop in ticket prices, thus reducing the profit space of airlines. Especially for some small airlines, it is difficult for them to play their own cost advantage to attract customers when the supply increases, and the operating pressure will also increase.

Some people in the industry pointed out that due to the increasing number of flights, consumers’ requirements for relevant infrastructure and reception capacity will also be further improved. “Especially in some tourist cities, after flights are encrypted, the capacity of local airports, ground transportation facilities, shuttle buses, restaurants and rest rooms will affect consumers’ choices.” Some insiders said, “however, as far as the current situation is concerned, the services and facilities in some areas are still insufficient, which is likely to become a decisive factor in opening the market echelon.”

In the face of the above problems, Wang Jiangmin proposed that in addition to improving infrastructure construction, aviation enterprises need to further increase product differentiation positioning, strengthen their cooperation with derivative services such as automobiles and feeder cars, and make more articles on one ticket to occupy more advantages in this “turning point war”. He suggested that enterprises should try to cooperate with more market resources, launch packaged products, such as “air ticket + shuttle”, “air ticket + tourism products”, and strengthen the construction of artificial intelligence and green channel for the elderly, so as to attract consumers with high-quality services.