On March 26, Zhihu was officially listed on the New York Stock Exchange. The opening price of $8.11 was 14.6% lower than the issue price. It closed at $8.44, but it was still below the offering price of $9.50. Considering that the stock price of China capital stock in the United States has plummeted and the company has not yet made a profit, Zhihu’s breakup seems justifiable. However, from the perspective of user payment scale, payment rate and other indicators, Zhihu’s performance reflects the embarrassment of the knowledge payment industry, such as small market space and low user repurchase rate. 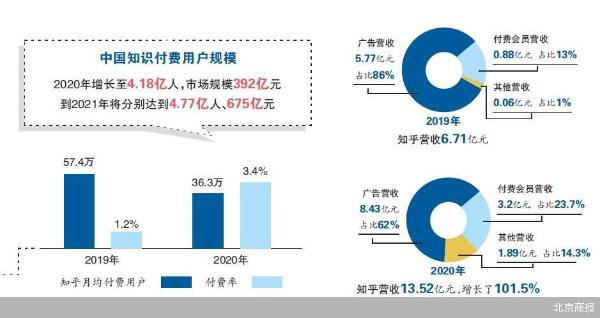 Wrapped in the news of the second listing of Baidu and station B, Zhihu’s attention to listing in the United States is much lower than expected. On March 26, Zhihu broke the market. People in the industry are not surprised by the performance of Zhihu’s share price, because many US internet companies have recently seen their share prices fall. Last week, Jingdong’s share price dropped from $326 to $313, Baidu’s from more than $250 to $214, and Netease’s from $168 to $159.

“This may be related to the tightening of US capital market regulation,” Li Jinqing, an analyst at Bida consulting, told Beijing business daily. His so-called regulation refers to the fact that on March 24, the securities and Exchange Commission of the United States passed a temporary final amendment to implement the requirements of the foreign company accountability act on information disclosure of listed companies, which is required by the United States Congress.

When it comes to Zhihu, after Zhihu entered the keyword “Zhihu break”, the first question and answer “how to view Zhihu listed on March 26, 2021” recommended by the platform also has the same view. The user “pure sun and moon” said, “Zhihu’s listing time is obviously not good. Now, the U.S. stocks are killing valuations very hard, especially some unprofitable Internet companies. Zhihu’s first day of listing broke sharply, with the deepest decline of 28%”.

However, Zhihu CEO Zhou Yuan did not take a stand on the decline of stock price. In his speech on listing, he emphasized the growth and future track of Zhihu, “Zhihu started from Q & A. In the Internet era, Zhihu has opened up a new scene for Q & A and created new value. Zhihu has gone beyond Q & A. We focus on user needs, constantly upgrade product functions and enrich media forms.

In fact, according to the data of the prospectus, Zhihu’s performance is not bad. In 2020, its revenue was 1.352 billion yuan, an increase of 101.5% compared with 671 million yuan in 2019. The revenue structure has also changed from relying on advertising to becoming more diversified.

Compared with myself, Zhihu also has a lot of brilliant operation data. Such as the average monthly payment users and payment rate. In 2020, Zhihu’s monthly paid users will increase from 574000 in 2019 to 2363000, and the payment rate will increase from 1.2% to 3.4%. However, arppu decreased from 12.77 yuan / person / month to 11.3 yuan / person / month. For the decline of arppu, the relevant people of station B did not give a direct explanation to Beijing business daily.

As there is no platform in China that can directly compare with Zhihu, the logic thinking of listing on GEM is to disclose revenue according to online knowledge service business, offline knowledge service business, e-commerce business and others. Litchi, which is considered to be an audio knowledge payment platform, disclosed its revenue according to audio entertainment, podcasting, advertising and other categories. Therefore, we can not directly compare the operation data of knowledge payment platforms.

The Kwai Chung has two attitudes towards this point. One view is that this shows that the B station’s revenue ceiling for membership and advertising business is still very high. Some people think that the gap between know and fast, B station and other data means that the revenue of paying for knowledge online is not large.

Lack of stamina in knowledge payment

In fact, people in the industry often collide with each other on the issue of what kind of platform they know. Zhihu is defined as “China’s largest Q & a online community”, but third-party organizations such as AI media consulting generally classify Zhihu as a comprehensive platform for knowledge payment.

According to AI media consulting data, the number of Chinese knowledge payment users will grow to 418 million in 2020, with a market size of 39.2 billion yuan. By 2021, the above data will reach 477 million people and 67.5 billion yuan respectively. Since knowledge payment was studied by the third-party organization, the user scale and market scale have been growing steadily, but compared with online video, webcast and other markets, the gap is obvious.

AI media consulting analyst Li Songlin also pointed out that in recent years, the rapid development of the knowledge payment industry and its brutal growth have led to many problems, among which the homogenization of content and the lack of authenticity of publicity are particularly prominent, which makes it less attractive to users for a long time, reduces users’ favor for the knowledge payment platform, and eventually leads to the low repurchase rate of knowledge payment products and services .

For the future, AI media consulting statistics show that 6.6% of users are very optimistic about the development prospect of China’s knowledge payment industry, and 43.5% of users are relatively optimistic. As for the development trend of knowledge payment platform, Li Songlin mentioned several points, including the downward penetration of user market and the improvement of the role of waist and tail creators.

In terms of supporting creators, Zhou Yuan made it clear when Zhihu went public that “Zhihu will anchor the dot of” service creators “to optimize services inward and break out outward. I’m going to share some of my equity with some excellent creators who accompany Zhihu’s growth.

In fact, supporting creators is a common practice of other content-based platforms. In the relationship between knowing and creator, there are user suggestions: “knowing what to solve is not to let your platform become a scenario of large V absorbing official account to precipitate private territory traffic, but to keep the big V in the nest where knowledge nests and achieve stable economic returns.”