Goubuli, once a leading brand in the baozi industry, began to shrink its offline stores after experiencing the “bad comment” storm of Wangfujing store last year. Recently, a reporter from Beijing business daily visited the former Goubuli Wangfujing store and Goubuli Beijing head office (Qianmen store), which were disqualified last year, and found that the Wangfujing store, which was disqualified, continued to open its shop to sell steamed stuffed buns with a new signboard, while the front store was closed, which was also the last store officially recognized by Goubuli in Beijing. In addition to the Beijing market, the reporter further investigation found that Goubuli in its “base camp” Tianjin also began to synchronize the contraction of catering stores. At the same time, Goubuli has put more energy on the line. Prepackaged steamed buns and all kinds of prepackaged foods have become the focus of Goubuli’s development. But for a time-honored catering brand with a hundred years of history, can this “arm breaking” move bring new life to it? 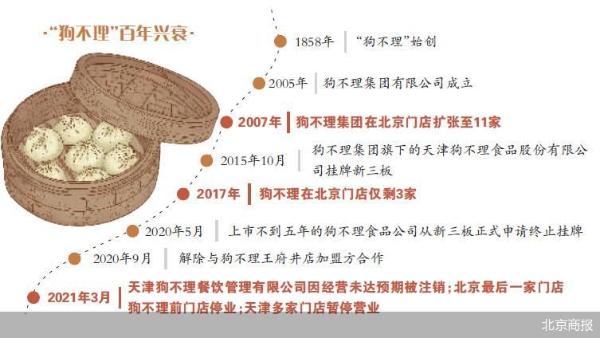 In recent years, the constant negative news of Goubuli seems to have begun a new round of “adjustment”. Recently, a reporter from Beijing Business Daily found that the Goubuli direct store in Qianmen has been closed. According to Goubuli’s official wechat, Goubuli’s former store is Goubuli’s last restaurant in Beijing, but at the same time, reporters can’t see this store on Goubuli group’s official website.

Beijing Business Daily reporter saw at the scene that the front door of Qianmen store was locked, and there was no one in the store. The location of the “Goubuli” signboard of Qianmen store was empty, and the words “interior decoration” were pasted on the door. According to the staff of other stores around, the store has been closed for nearly half a month before Goubuli, and there is not much decoration in the store, but the signboard at the door has been removed. The reporter also visited Goubuli Wangfujing store, whose franchise right was withdrawn by Goubuli group due to the “bad comment” storm last year, and found that the store has now been renamed “Jingmen Maji baozi shop”. The reporter found that in addition to the front door and the brand story at the door, the interior decoration, tables and chairs, products and service mode of the store are the same as before Make a difference.

According to the official website of Goubuli group, Goubuli has no stores in Beijing. Beijing Business Daily reporter then contacted Goubuli group on whether the former Goubuli store will open again in the future and the development plan of Goubuli group’s catering business in Beijing. The staff of the other party provided the reporter with the contact information of the relevant person in charge. However, when the reporter called the person in charge according to the contact information, the other party said that “the wrong number”. Subsequently, the reporter sent an interview outline to Goubuli group by email, but no reply has been received as of press release.

Similar things happened in Tianjin market. Just a week ago, a “Tianjin Goubuli Catering Management Co., Ltd. disbanded” news, let Goubuli triggered a hot discussion. Afterwards, Goubuli group responded that its Goubuli catering chain Wuqing store was registered as Tianjin Goubuli Catering Management Co., Ltd. The group decided to close and cancel the store because the business didn’t meet expectations. It wasn’t “Tianjin Goubuli cancelled” or “Goubuli decided to dissolve”. However, according to the public comments, a number of Goubuli stores in Tianjin have shown “suspension of business” just like today’s Goubuli stores.

In fact, the feedback of Goubuli restaurant chain business in the market in recent years is not ideal, and some negative comments such as “high price” always exist. In addition, some franchise stores have frequent problems. Previously, the store in Wangfujing caused a storm of public opinion due to the video of the blogger exploring the store. Finally, Goubuli group also released the cooperation with the franchise Party of the store. At that time, Goubuli group said that after the restructuring, Goubuli group insisted on direct operation. As of September 2020, more than 80 franchise stores in various regions had been withdrawn. However, from the current number of stores, Goubuli did not accelerate the layout of the physical catering market after taking back the franchise stores, but has been shrinking the catering business.

Compared with the frequent closure of physical restaurants, Goubuli seems to be gradually positioning itself on the production and sales of frozen food, and may hope that the food business will become its main play. Beijing business daily learned from the official website that Goubuli’s quick-frozen food business currently includes online and offline multi-channel cooperation, offline cooperation with supermarkets and other channels, and online establishment of tmall and Jingdong flagship stores. According to the flagship store of Goubuli tmall, the products currently sold in the store include steamed buns, dumplings, semi-finished products and so on, and the fast-frozen steamed buns still sell the most.

In addition, Goubuli has also started a new “curve” layout. On March 24, Goubuli group and Xiamen Airlines Tianjin branch formally signed a strategic cooperation agreement. It is understood that in this cooperation, the two sides will carry out the research and development of on-board customized meals, expand and extend the aviation industry chain, and Xiamen Airlines will include Goubuli into the designated supply base of catering raw materials.

Humanistic Zhihong, partner of Hejun consulting and head of chain operation, said that Goubuli’s catering business has been shrinking in recent years. The fundamental problem is that Goubuli’s catering chain operation and management ability is relatively weak, including direct business and franchise business, and its operation and management level and control ability are not very strong.

Is such “broken arm” worth it

Beijing Business Daily reporter saw on Goubuli group’s official website that Zhang Yansen, chairman of Goubuli group, made it clear in an interview with the media at the beginning of this year that he would focus on the food industry and e-commerce business, and at the same time, on the basis of reducing the number of stores, he would do a good job in remaining stores. This also means that the catering business will no longer be the core of Goubuli’s future development. As a time-honored brand with a history of more than 100 years and started with catering business, is such transformation worthwhile?

In the view of a person in the catering industry, Goubuli’s transformation is actually “forced”. In recent years, the negative news of Goubuli’s catering business continues, “not delicious but expensive” has become the impression of many consumers on this time-honored brand, damaging the image of this time-honored brand. In addition, both Goubuli Wangfujing store and Qianmen store occupy a very favorable geographical position, but from the perspective of consumer reputation, the two stores are constantly getting bad reviews. In today’s competitive catering market, if Goubuli wants to continue to rely on the catering business, it is very difficult.

Wen Zhihong said that Goubuli contracted its catering service business. Although it made some achievements in the industrialization of food, it did not really enlarge its value. Moreover, the scale of food industrialization is not particularly large at present. “Goubuli is a gold lettered signboard, but it has not developed very well in recent years. In the future, profound changes must be made in the concept and strategic level to rethink the development layout. For example, from the food industry and catering services to develop two lines. In addition, in terms of business layout, online and offline dual channel development, offline market layout can increase the market except Tianjin. Of course, the premise is to complete the systematic reform and reconstruction from the concept to strategy, mode and management, then the value of Goubuli brand can be re transformed. ” Wen Zhihong said.

Catering chain consultant Wang Dongming said that the shrinkage of Goubuli’s catering business is mainly due to the disconnection with the market, and its products and stores have deviated from the taste, decoration and price range of the existing core consumers. For time-honored brands, they should keep pace with the times. As a brand, they can only be eliminated by sticking to it.