From cycling to charging, to umbrellas, mobile phones and so on, in the constant controversy, sharing power bank and even the first share of the sharing industry appear. On the evening of April 1, monster charging landed on Nasdaq, ringing the bell of listing. Just before the official listing of monster charging, it was also reported that soudian charging had obtained 800 million yuan of financing and would formally merge with Jiedian. Within a day, wave after wave of news continuously released the gunpowder smell of shared charging capital competition to the outside world. 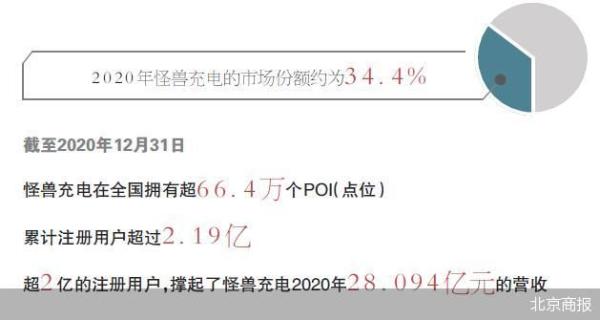 From the submission of the prospectus to the official landing on Nasdaq, monster charging was officially listed in just over ten days. Monster charging is priced at $8.50 per share, with an opening price of $10 per share, an increase of about 17.65%.

On the day of monster charging’s launch in the United States, soudian charging also released new news one after another. On the afternoon of April 1, soudian announced that the company had completed two consecutive rounds of financing, with an accumulated financing scale of over 800 million yuan. At 9 p.m., soudian power announced that it would formally merge with Jiedian, and the two sides would jointly form a new group company. After the merger, the user scale will exceed 360 million, and the daily order peak will reach 3 million orders / day.

Beijing Business Daily reporter contacted the relevant person in charge of soudian charging. The person in charge said that through this round of financing, soudian power expanded its market scale and consolidated its market position. The company will increase investment in software and hardware research and development, and explore more layout scenarios. After the merger with Jiedian, the two brands’ equipment leasing methods, the original rights and interests of registered users, and the authorization of agents and partners will not be affected. The two sides will integrate the experience and expertise of the two brands in management and R & D, cooperate and develop in supply chain management, hardware and software R & D, customer service and other aspects, complement each other in business model and talent structure, and jointly explore the development of direct sales + agency direct generation mode, so as to continue to provide efficient, convenient and reliable shared charging services for consumers.

Capital bets return to the market

Since the development of the sharing power bank industry, it seems to have formed an industry pattern of “three electrics and one beast”. However, in the past less than a year, the listing of monster charging, the launching of the listing process of Xiaodian technology, the end of meituan, the high-profile announcement of financing and the merger with Jiedian by soudian, all these events show that the capital has been paying close attention to the shared charging circuit. The entry of giants into the market makes the competition more intense.

The last “spring” of shared charging was in 2017. At that time, the capital was in place, the big players entered, and the channel scramble and scuffle officially began. In the spring and summer of 2017, each shared charging enterprise announced that the total amount of financing exceeded 1.2 billion yuan in two months. At that time, the recognized head players were street power, small power, incoming call and hi power, and now they have also experienced a player shuffle.

It is worth noting that when the sharing charging industry entered the competition of version 2.0, the layout of charging points was not saturated. According to the “white paper on China’s shared power bank industry 2021” recently released by frost Sullivan and toubao Research Institute, in 2020, the transaction scale of China’s shared economy market will be about 3377.3 billion yuan, and the compound annual growth rate of the shared power bank industry will reach 20.8% in the next five years. This figure shows that even the top echelon brands with mature products and models still have enough room for development.

Chen Xian, monster charging investor, CMC capital partner and chief investment officer, believes that the power consumption in 5g era is still expected to increase significantly. As one of the best solutions, the penetration rate of shared power bank is still increasing and there is still a large space.

According to the 2020 Research Report on the sharing power bank industry released by iResearch, the penetration rate of the overall offline consumption scenarios of sharing power bank is between 20% and 30%, of which 50% is distributed in catering scenarios, while other scenarios such as bars, hospitals, hotels, KTVs, Internet cafes and transportation hubs have not been effectively penetrated.

Capital has entered a new round of reshuffle. The competition barrier of sharing charging industry has not yet appeared, and the substitutability between brands is still maintained. For users, in any scenario, when they need to share the power bank, “who uses who”, the brand recognition is not high.

In the view of Bo Wenxi, chief economist of IPG China, the technology and investment threshold of shared charging are low, resulting in low industry concentration. Therefore, under the continuous capital injection, how to use capital to quickly promote industry integration, enhance concentration, and form an oligopoly pattern is an important part of maintaining the sustainable operation of the industry.

Although sharing power bank is favored by capital in financing, offering and listing, negative news such as “cutting leeks” and hidden price increase also follow. A person in the industry who declined to be named said that the emergence of shared power bank provides users with a choice, and there is no saying of “cutting leeks”. But some consumer places also have the phenomenon of sharing power bank to occupy free charging socket.

On the one hand, the shared charging industry is facing the capital market, and on the other hand, users are paying for the rising price of the shared power bank. How to tell a new story of shared charging in the future? Zhang Xiaorong, President of the Institute of deep science and technology, believes that although shared charging serves rigid demand in a certain scenario, it is not high frequency. This service can be used to attract platform users, but it is not suitable for the ultimate purpose of the company’s operation.

Monster charging officials said that the new Baijiu, a new liquor brand that charges the inside hatching, was released early this year. It has been sold online and offline. It can be seen that sharing charging enterprises are making use of the network effect and channel advantages of sharing charging business to realize channel reuse of other categories and complete the docking of sharing charging network and consumption network.

The profit of shared charging industry should not be limited to rental charges, but should focus on data application. Wang Chikun, an independent economist, believes that the advantage of the shared charging platform is to collect user information, which is a good channel for innovation and traffic. Product designers and developers can use this data to make more accurate product functions and customer experience, which is conducive to product upgrading and iteration, or accurately match, promote or advertise according to user data, and accurately innovate Or drainage.