“The financial markets of emerging economies fluctuate greatly, and the impact on China’s financial markets is relatively small.” “the cross-border use of digital RMB in the mainland and Hong Kong has been technically tested.” “betrothal gifts loan and graveyard loan reflect the lack of service ability of some small and medium-sized banks.” “the pressure of rising house prices in some hot cities is still relatively high” On April 1, at the press conference of “building a new development pattern and supporting regional coordinated development” held by the State Council Information Office, Liu Guiping, vice governor of the people’s Bank of China, Wang Xin, director of the Research Bureau, sun Guofeng, director of the monetary policy department, and Zou LAN, director of the financial market department, made one by one responses to a number of hot issues such as the trend of monetary policy and the dynamics of digital RMB. 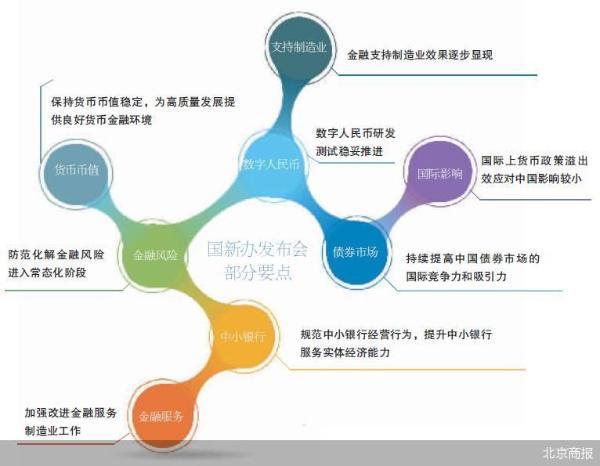 Under the background of rising U.S. bond yields, the possible spillover effect on China has become a hot topic recently. On this issue, sun Guofeng said that China’s financial market is running smoothly and is less affected by the international market.

According to sun Guofeng, in 2020, China will be the only major economy in the world to achieve positive growth, and also a few major economies to implement normal monetary policy. Recently, the US bond yield has risen, the debt repayment and refinancing risks of some emerging economies have increased, and the pressure of currency devaluation has increased. Since May last year, China’s central bank’s monetary policy has returned to normalization without excessive stimulus.

“Therefore, whether the US Federal Reserve launched large-scale monetary stimulus measures last year or the US Federal Reserve adjusts its monetary policy in the future, the impact on China’s financial market is relatively small.” Sun Guofeng said that China’s financial market is running smoothly, the RMB exchange rate is floating in both directions, the yield of 10-year Treasury bonds is currently around 3.2%, which is still declining compared with the previous period, and the positive role of implementing normal monetary policy is emerging.

“The content presented at the press conference is basically consistent with the central bank’s early statement,” said Zhou Maohua, financial market analyst of China Everbright Bank. On the one hand, monetary policy should ensure the balance of macro leverage, but it can not reduce the support for weak links and key areas of the real economy and release the vitality of micro entities.

Zhou Maohua pointed out that the current global epidemic has not been completely controlled, some domestic industries are still under pressure, and this year’s steady employment pressure is still heavy. Monetary policy needs to be precise, strong and weak items to make up for weaknesses, while maintaining moderate easing, do not engage in “flooding”, and balance supporting economic recovery and preventing risks.

In terms of building a modern monetary policy framework, sun Guofeng also mentioned that the central bank has promoted the quoted interest rate (LPR) in the loan market, which is a key link in maintaining the stability of monetary policy. Beijing Business Daily reporter found that up to now, LPR has been standing still for 11 consecutive months, of which 1-year LPR is 3.85%, and more than 5-year LPR is 4.65%. Sun Guofeng pointed out that LPR is not only an important part of the formation and transmission mechanism of market-oriented interest rate, but also a key component of the money supply regulation mechanism.

When conditions are ripe, cross border transactions can be realized

According to Wang Xin, “in the early stage, the digital currency Research Institute of the people’s Bank of China and the Hong Kong Monetary Authority conducted a technical test on the cross-border use of digital RMB in the mainland and Hong Kong. This is a routine R & D test of RMB pilot. In China, digital RMB is being tested in many regions, including the Winter Olympic Games. There are more and more testing scenarios for digital RMB. At the same time, we are also working with the Hong Kong Monetary Authority to conduct some technical tests on cross-border use. “.

“Central bank digital currency is a hot topic in the world. Many central banks are conducting research and exploration, and there are similar cooperation projects among different central banks, so the people’s Bank of China is also exploring the feasibility of digital RMB.” Wang added.

New progress has also been made in cross-border payment. On April 1, according to the official announcement of Shenzhen Luohu District, the people’s Government of Luohu District, in cooperation with Bank of China and Bank of China Hong Kong Co., Ltd., took the lead in successfully completing the test work of using digital RMB for Hong Kong residents in the mainland.

Sun Yang, director of the financial technology research center of Suning Financial Research Institute, told Beijing Business Daily that the future application of digital RMB in Guangdong, Hong Kong and Macao is worth looking forward to. This is of great significance for promoting real trade and financial connectivity in the Greater Bay area, and can also accelerate the pace of RMB internationalization in Southeast Asia.

Some hot cities are still under great pressure

According to Zou LAN, the current macro environment is still complex and severe. The stock market, bond market and bulk commodity market are facing the risk of shock. A few large enterprise groups are still in the risk exposure period. Medium and low qualified enterprises are still facing financing difficulties, and the risk of debt default is relatively high. The pressure of rising house prices in some hot cities is still relatively high, and the potential risks such as debt default of high leverage small and medium-sized real estate enterprises also deserve continuous attention.

Zou Lan said that in the next step, the prevention and resolution of financial risks will enter the stage of normalization. The financial management department will continue to focus on key areas and do a good job in resolving stock risks. At the same time, it will continue to improve the system and mechanism construction, improve the financial risk prevention and early warning system, enhance the foresight, overall situation and initiative of financial risk prevention and control, and firmly guard against the occurrence of systemic financial wind The bottom line of insurance is to create a good financial environment for sustained economic recovery and high-quality development.

On this issue, Zhou Maohua said that such a variety of consumer loans under the circumstances of non-standard operation, easily lead to potential risks, on the one hand, may lead to illegal capital flow into the real estate market, stock market, asset bubbles and bank balance sheet imbalance, etc., on the other hand, it can cause residents to over indebtedness. We should strengthen the bottom line of financial services, and guide financial institutions to improve the quality of internal risk management.