It failed to catch up with Juewei, but was overtaken by Huangshanghuang, and Zhou black duck’s position in the stew industry declined again and again. On April 1, Zhou Heiya said in an interview with Beijing Business Daily that the decline of passenger flow and the closure of some stores affected by the epidemic were the main reasons for the decline of the company’s performance in 2020.

In the view of industry insiders, Zhou black duck’s headquarters is located in Wuhan, which is greatly affected by the epidemic. However, before 2020, Zhou black duck has seen two consecutive years of performance decline, and hopes to improve the situation by starting franchising. Now, not only the performance has declined again, but also it has been surpassed by Huang Shanghuang. Whether Zhou Heiya can keep the current market share has become an urgent problem to be solved. 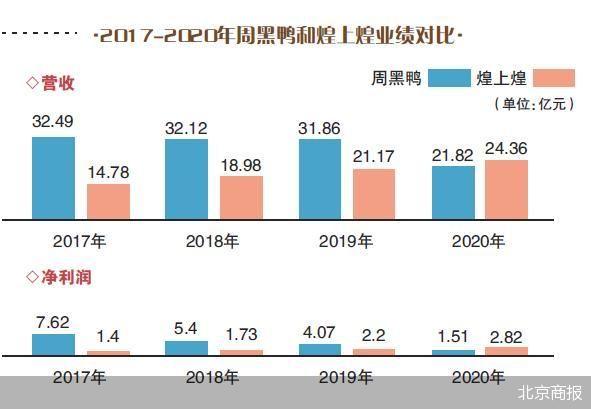 “Novel coronavirus pneumonia caused a sharp decrease in the number of retail outlets, especially in Central China, and sales declined,” Zhou duck said in its performance report. With the improvement of the epidemic situation in the second half of 2020 and the optimization and adjustment of the store network, the business situation has recovered.

Zhou Heiya said in an interview with Beijing Business Daily that during the epidemic period, Hubei and transportation hubs were seriously affected, and these areas were the focus of the company’s strategic layout. In addition, nearly 1000 stores were closed during the epidemic period, and production activities in Central China production center were suspended for 49 days, which greatly affected the annual revenue.

According to public information, Zhou Heiya was founded in 1997 and listed on the main board of the stock exchange of Hong Kong in November 2016. It is an enterprise engaged in the production, marketing and retail of leisure cooked brine products. Its main business includes stewed duck, duck by-products, stewed red meat, stewed vegetables, stewed poultry and aquatic products.

To be surmounted by Huang Shanghuang

Different from the decline of Zhou Heiya’s revenue and net profit, Huang Shanghuang, another Luwei listed company, will achieve double growth of revenue and net profit in 2020. According to the data, from January to December 2020, Huang Shanghuang achieved an operating revenue of 2.436 billion yuan, a year-on-year increase of 15.09%, and the net profit attributable to the shareholders of the listed company was 282 million yuan, a year-on-year increase of 28.04%.

It can be seen from the data that before 2020, Zhou Heiya’s revenue and net profit are higher than Huang Shanghuang’s, but the gap between them has gradually narrowed in the past two years.

In addition to the performance of Huangshanghuang anti super, from the market share point of view, Zhou black duck stewed “second brother” position is also in danger. Data show that in 2020, the top five enterprises in China’s leisure brine products industry are Juewei food, zhouheiya, Huangshanghuang, Ziyan and jiujiuya, with a total market share of only 19.23%, of which Juewei, zhouheiya and Huangshanghuang account for 8.6%, 3.32% and 3.15% respectively.

According to Zhu danpeng, an analyst in the food industry, the main reason why Zhou Heiya was defeated by Huang Shanghuang is that the direct marketing mode has brought about weak store expansion, and the gap in scale has caused Zhou Heiya’s performance and status to retreat again and again.

Different from the “direct chain + franchise chain” mode of Huangshanghuang and Juewei, black duck has always been a self operated mode in the week before the opening of franchise in 2019. As a result, there is a big gap between zhouheiya and Huangshanghuang in the number of stores. The data shows that in 2020, there will be 1755 stores in zhouheiya. At this time, Huangshanghuang has 4627 stores, twice as many as zhouheiya. Although Juewei food has not yet announced its performance in 2020, according to the data in the first half of 2020, by the end of June 2019, zhouheiya had 1255 stores, less than 12% of Juewei’s 10598 stores.

Can Zhou Heiya’s franchising “save the market”? This is probably the problem that the market and even Zhou Heiya urgently want to know.

Although Zhou Heiya intends to improve the performance by changing the business model, the effect is not satisfactory. According to the financial report, in 2020, the revenue of zhouheiya’s self operated stores was 1.4 billion yuan, while that of franchising was only 140 million yuan, accounting for only 1 / 10 of the total revenue.

“The reason why Zhou Heiya failed to significantly boost its performance after opening up its franchise is that on the one hand, it was late in its layout; on the other hand, it was faced with short supply chain.” In the view of the industry.

From the perspective of industry competition, Zhou Heiya has limited space and time for store expansion. Data show that by the end of 2020, Huangshanghuang has 4627 stores, including 345 Direct stores and 4282 franchise stores. Its sales network covers 26 provinces or municipalities directly under the central government and 235 prefecture level cities. And Juewei food’s more than 10000 stores cover almost all provinces of the country.

From its own point of view, the supply chain is a problem Zhou Heiya needs to solve. It is reported that Zhou black duck adopts the mode of central factory, centralized production + national distribution. At present, zhouheiya has five factories. The Nantong factory in Jiangsu Province was officially put into operation on January 28 this year, while the Sichuan factory is still under construction. “The plant is expected to go into operation in 2022.” Zhou Heiya said.

In contrast, the supply chain system of Juewei food is multi base production + local distribution, which is convenient for delivery to stores in various regions. At present, Juewei has established more than 20 production bases nationwide, which can produce and deliver on the same day. Even in Huangshanghuang, there are six production bases in China.

“There is no doubt that opening up franchising is a shortcut for Zhou Heiya to accelerate its scale expansion. However, the “centralized production + national distribution” supply system of Zhouhei duck results in a long distribution time. The expansion of franchise will cause a new problem – insufficient capacity supply. ” Fast consumer new retail expert Bao Yuezhong said.

As for the future development plan, Zhou Heiya’s relevant person in charge said in an interview with Beijing Business Daily that “in the future, Zhou Heiya will take accelerating the expansion of franchise stores and improving the quality of stores as the two major starting points, and comprehensively promote digital intelligent operation, increase investment, and promote the development of Internet O & amp; O channels from three aspects of consumer end, supply end, and retail end.”.