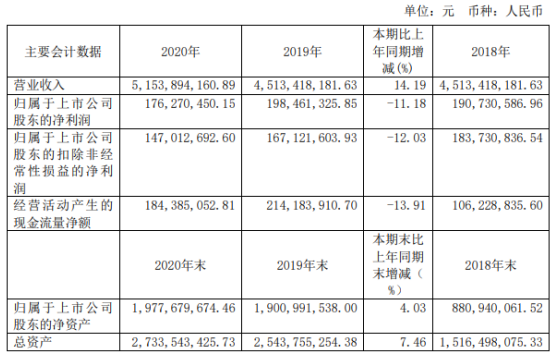 In 2020, the freight forwarding business volume was 1.3514 million TEU, with a year-on-year increase of 10.38%; the revenue was 3.636 billion yuan, with a year-on-year increase of 20.19%. In 2020, the company will overcome the adverse effects of the epidemic, actively expand its business scale, and the business volume will increase significantly. At the same time, affected by the rising freight rates in the shipping market in the second half of the year, the company’s freight forwarding revenue will grow.

According to the disclosure of the announcement, the profit distribution plan or the plan for converting the accumulation fund into share capital in the report period reviewed by the board of directors: the company will distribute cash dividends of 3.75 yuan (tax included) to all shareholders for every 10 shares based on the total share capital of 266.6667 million shares as of December 31, 2020. A total of RMB 100000012.50 (tax included) cash dividends were distributed, no bonus shares were given, no capital accumulation fund was converted into share capital, and the remaining undistributed profits were carried forward for future annual distribution.

According to the data of digbei.com, Zhongchuang logistics is mainly engaged in comprehensive modern logistics business, providing one-stop cross-border comprehensive logistics services for participants in import and export trade based on domestic coastal port container and dry bulk cargo trade.