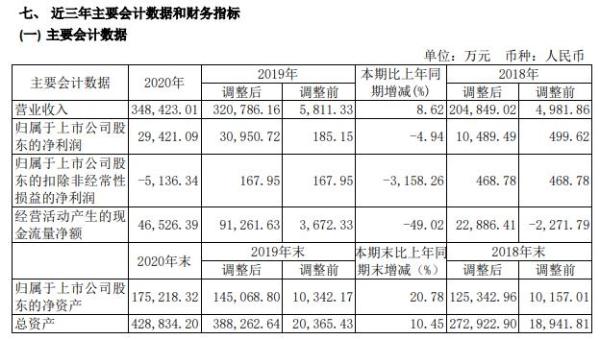 During the reporting period, the net cash flow from operating activities was 465263900 yuan, and the net assets attributable to the shareholders of the listed company was 1752183200 yuan by the end of 2020.

Reasons for the change of business income: the main reason is that the business of sanitation equipment and sanitation services continued to grow, and the income increased accordingly.

According to the announcement, after auditing by Daxin accounting firm (special general partnership), the company realized the net profit of 294210887.93 yuan attributable to the owners of the parent company in the consolidated statements in 2020, and realized the net profit of – 7326819.23 yuan in the statements of the parent company. In 2020, the undistributed profit of the parent company at the beginning of the year is -295808259.90 yuan, and the profit available for distribution at the end of the year is -303135079.13 yuan. According to the relevant provisions of the company law and the articles of association, the company plans not to distribute profits in 2020, nor to convert the capital accumulation fund into share capital.