In the current world of insurance companies, there are many who “nibble and swallow” to increase the layout, and there are many who “dejected” to leave. On April 6, according to incomplete statistics from Beijing business daily, 12 insurance companies changed their equity in the first quarter of this year, among which foreign shareholders were particularly active. Industry insiders believe that compared with the first quarter of last year, equity changes in the insurance industry are more frequent, or it has something to do with the disagreement among shareholders caused by the downturn of property insurance and the variable business model of life insurance. The introduction of relevant policies has accelerated the opening up of the financial industry and increased the distribution of foreign capital in China. 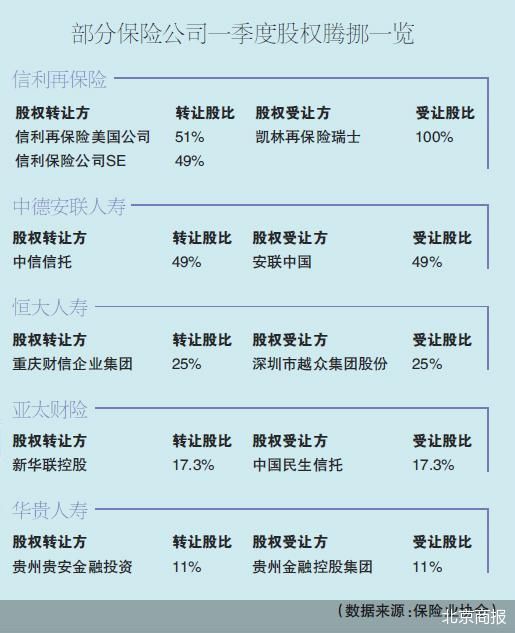 Prior to that, in 2019, BOCOM life released an information disclosure announcement on the change of shareholders, which showed that the former shareholder, Kanglian group of Australia, which held 37.5% of the shares, planned to transfer all the shares of BOCOM life to MS & amp; ad Insurance Group Holding Co., Ltd. On December 8, 2020, the China Banking and Insurance Regulatory Commission issued an administrative license to approve the change of equity.

In fact, the renaming of BOCOM life insurance is just a “profile” of equity change.

According to the statistics on the official website of the Insurance Association, a reporter from Beijing Business Daily found that in the past quarter, a total of 12 insurance companies disclosed the information about the proposed change of equity, which is a small climax compared with the proposed change of equity of 5 Insurance Companies in the first quarter of last year.

Wang Xiangnan, deputy director of the insurance and economic development research center of the Chinese Academy of Social Sciences, pointed out that the main reason for the frequent change of equity of insurance companies in the first quarter was that the financial industry increased the opening of the market, fully implemented the announced policies, and promoted foreign investment in insurance and other financial fields to start or increase investment in domestic insurance companies.

“Last year, the growth and profitability of property insurance companies were in a trough, and the life insurance business model was also variable, which easily led to different opinions among shareholders of the company and prompted shareholders to adjust. Secondly, after the effective implementation of the regulatory rules on equity and corporate governance, the administration of equity change of the company was smoother.” At the same time, Wang Xiangnan added.

What are the possible driving factors behind the equity changes of these small and medium-sized insurance companies? What impact will it have on these companies?

For the small-scale equity transfer, most people in the industry believe that it is a normal market behavior in financial investment.

At that time, Xu Yuchen, a founding member of the Chinese Association of actuaries, said that from the perspective of his business scope and only 10% shareholding ratio, Lushan high-quality coal was only an ordinary financial investment rather than a strategic investment for Huahai property insurance. If the equity transfer was successful, it would not have much impact on the operation and management of Huahai property insurance.

Beijing Business Daily reporter interviewed Huahai property insurance about the latest progress of the equity change, but as of press release, no reply has been received.

In addition, in the first quarter, SINOSURE China’s equity move was the largest, and its new shareholders, Kailin reinsurance Switzerland or SINOSURE us and SINOSURE se, became the only shareholders of SINOSURE China. However, to trace back to the source, this equity change may be regarded as a game of “left hand to right hand” for capital. As AXA Group of France is also the ultimate controller of Kailin reinsurance Switzerland, if the equity transfer is completed, the ultimate controller of SINOSURE China will remain unchanged.

In addition, small shareholders of Shidai Property & Casualty Insurance Co., Ltd. have also left the market, which is only one step away from the wholly-owned holding of foreign capital. According to its disclosure announcement in early March, Shidai compensation and liability insurance, the largest shareholder of Shidai property insurance, plans to acquire 2.8 million shares held by Kunlun Trust Co., Ltd., the former shareholder of Shidai property insurance. If the transaction is approved by the regulatory authorities, the share ratio of compensation and liability insurance of Shidai will rise from 77.58% to 77.78%; taking into account the 20% shares held by Shidai insurance and reinsurance company, Shidai will hold 97.78% of Shidai property insurance. As for the activity of foreign investment in the domestic insurance market in the first quarter, Li Wenzhong said that first of all, the regulations on the administration of foreign insurance companies and the detailed rules for the implementation of the regulations on the administration of foreign insurance companies have been implemented successively, creating a better investment environment for foreign shareholders. Secondly, foreign investment has always been optimistic about the future development of China’s insurance industry. Finally, the setting of return period of foreign shareholders is longer than that of many domestic shareholders.