There is always no shortage of “crazy stones” in the market. After iron ore, copper will relay. Since last year, copper prices have been rising steadily. Now the border of Chile, the largest copper producer, is closed. As a result, the tension spreads again. It is expected that this will add another fire to the rising copper price. The expectation of economic recovery is the main factor supporting this round of copper price rise. As one of the most widely used metals in industry, copper is also used in almost all fields, from wire to battery and motor. While the copper price rises, the impact is gradually transmitted along the industrial chain. 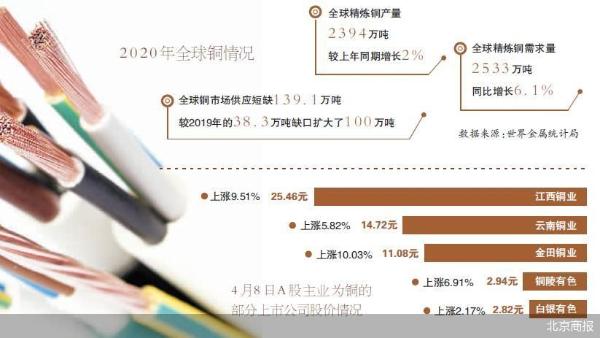 Global commodity market meets “black swan” again. Even though the rise has become the key word of copper price in the past six months, this situation is particularly obvious in the last two days. By the end of April 7 local time, the price of copper on the London Metal Exchange (LME) was US $8981.5 per ton. The day before, the price of copper futures on the LME rose by 3.6%, breaking through the US $9000 per ton to US $9104 per ton, reaching the highest level in two weeks.

The situation of international copper prices has also been transmitted to the domestic market. On the A-share market on April 8, steel and nonferrous metal plates showed a strong trend throughout the day, leading the rise of industry plates. Among them, Anyang Iron and steel, Jintian copper trading, Jiangxi copper, Tongling Nonferrous once trading.

The reason for the surge in copper prices is Chile, the world’s largest copper producer. Before that, in view of the severe situation of the rebound of the epidemic, the Chilean government announced to upgrade a series of epidemic prevention measures, including closing the border from April 5 to May 1 local time to strengthen the epidemic prevention and control.

Although Chile’s Ministry of energy and mining responded that closing the border would not affect the normal operation of mining enterprises, Chile’s move still attracted high attention from the commodity market. Driven by the tension, international copper prices rose sharply. In addition to LME, the price of copper futures on the New York Mercantile Exchange also rose the most in six weeks on April 5.

It is understood that Chile is the world’s largest copper producer and the second largest lithium producer. According to USGS data, Chile’s supply of copper and lithium accounts for about 1 / 4 of the global supply. In 20 years, the global copper production was about 20 million tons, of which Chile’s production was about 5.7 million tons, ranking first.

In fact, Jiang Shu, the chief analyst of Beijing electric wire and cable industry, said that the current application is mainly in the economic cycle analysis of Beijing electric wire and cable industry. If the economic cycle runs at a relatively high point and the demand for copper is slowly transmitted from the downstream to the upstream, the price will be relatively strong. Moreover, a big part of copper is concentrated in Chile. If there is a little risk in the supply, the outside world will feel a great impact on the market.

However, Jiang Shu also mentioned that the reality is that in the past, even if there was no epidemic, Chile often suffered from earthquakes, and sometimes there were strikes. In fact, there were short-term interruptions in the past, but each news had different impacts on the market in different contexts. Moreover, it is hard to say whether Chile’s port closure will have an absolute impact on logistics. After all, mining production is not carried out in a sealed environment, so the supply process itself may not be greatly affected. This news is mainly a psychological impact on people. In the future, we will also think about the actual impact of the closure of Chile’s port, and may gradually return to the economic fundamentals.

Codelco, the world’s largest copper producer, is trying to placate the market over concerns. Juan Benavides, Codelco’s chairman, was asked if Chile’s tightening of the blockade this week would disrupt the company’s operations and shipments. “Absolutely not,” he said

In fact, the craziness of copper prices did not begin with Chile’s “black swan”. Since the fourth quarter of 2020, global commodity prices have been rising rapidly, among which copper and lithium prices are in the forefront. According to the statistics of China Nonferrous Metals Industry Association, in the first two months of this year, the output of ten commonly used nonferrous metals exceeded 10 million tons, a year-on-year increase of 10.6%.

Raw material prices rise, downstream enterprises can imagine the pressure. As one of the most widely used metals in industry, copper is used in almost all fields, from wires and pipes to batteries and motors. Data show that China’s global copper consumption accounts for more than 50%, mainly used in electric power, household appliances, construction, new energy vehicles and other industries.

CCTV financial report once mentioned that the main force of Shanghai copper reached a nine-year high of 70000 yuan per ton at the end of February. Because the profit model of copper processing enterprises such as enameled wire is charging processing fees, they do not directly bear the pressure of copper price rise, and the pressure of copper price rise directly falls on the downstream enterprises. For example, Midea has informed that the price of Midea’s refrigerator products will increase by 10% – 15% since March 1. According to relevant data monitoring, the average prices of offline refrigerators, washing machines and air conditioners rose by more than 10% year on year.

Hu Qimu, chief researcher of Sinosteel Economic Research Institute, told Beijing Business Daily that copper has good thermal conductivity and conductivity, strong chemical stability, corrosion resistance, easy fusion and good ductility. This makes copper widely used in electronics, energy, petrochemical, machinery, metallurgy and light industry. As an important industrial raw material, the rise of copper price will be transmitted downstream along the industrial chain. If manufacturing enterprises can’t digest the rising cost, it is bound to pass it on to consumers by increasing the price of finished products. Of course, how much the final price of finished products will rise depends on the market structure and the relationship between supply and demand.

In addition, Jiang Shu also mentioned that the rise of copper price will certainly have an impact on the downstream market, but the current financial market has also given many downstream enterprises means to deal with it. Even if not all downstream enterprises can hedge their impact through hedging, at least some enterprises will do so. Moreover, in the industrial chain, all levels can gradually digest the price increase, and the situation is not so serious at the end. In addition, scientific and technological innovation will also lead to increased production capacity, which will break down the pressure through sales.

Will it continue to rise

Economic recovery is the key to support the rise of copper prices. The US nonfarm employment report released last week was better than expected, which triggered an optimistic expectation of economic recovery and helped the international copper price. The infrastructure construction plan announced by US President Biden also means an increase in demand for copper.

As for the rise of copper price, Hu Qimu said that there are two main factors driving the rise of copper price at present. One is the price rise caused by monetary easing, and the other is the price rise driven by the sustained recovery of demand as the global epidemic situation eases. Due to Biden government’s large-scale economic stimulus plan recently, China’s economy is expected to achieve a year-on-year growth of about 20% in the first quarter. In addition, many countries have delayed to withdraw from the loose monetary policy in order to make the economic recovery more solid. Therefore, even if the copper price is close to the historical high, it is still possible to continue to rise.

More importantly, copper prices have caught up with the fire of green energy. Not long ago, Goldman Sachs also mentioned that copper, which has performed well in the past six months, will have more room to raise its price in the future, because copper is also one of the indispensable metals in the green industry. Among the major economies in the world, green industry is a well deserved hot spot. Goldman Sachs estimates that copper demand related to green industry will reach 1.1 million tons this year, 3 million tons in 2025 and 6.2 million tons in 2030, according to the bank’s basic assumption.

Hu Qimu explained that first of all, the development and application of energy-saving and emission reduction technologies in copper mining and smelting and the improvement of copper use efficiency can reduce carbon emissions. In addition, the recycling of copper scrap will also play an important role in reducing carbon emissions in the industrial chain. Jiang Shu mentioned that the general green industry is mainly from the perspective of carbon emissions, and the biggest part is related to energy, that is, to reduce fossil fuels as much as possible, so as to adopt sustainable green energy. In the aspect of green energy, such as wind power generation and solar cell panels, copper can participate in it, which is an important industry with good conductivity Metal will be widely involved in the manufacturing of electric energy equipment.