The annual reports of A-share listed companies in 2020 have been released one after another. In the evening of April 12, Senma clothing also disclosed the report card of the annual report in 2020. From the data disclosed, in 2020, the revenue and net profit of Senma Clothing Co., Ltd. will double drop, and the net profit of Senma Clothing Co., Ltd. in 2020 will be almost “cut by the waist”.

On the main reasons for the decline of the company’s performance in 2020 and other related issues, a reporter from Beijing Business Daily called Senma clothing securities department for an interview, but no one answered the phone. 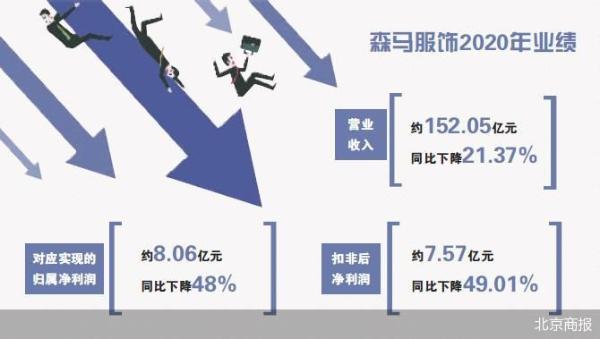 Cheng Weixiong, an expert in textile and clothing brand management and general manager of Shanghai Liangqi Brand Management Co., Ltd., said that under the influence of the epidemic situation, traditional clothing enterprises, mainly offline, have been greatly impacted. Although Senma clothing and children’s clothing business accounts for a relatively high proportion in the whole children’s clothing market, due to the pressure of the continuous expansion of physical stores, coupled with the impact of the epidemic on the offline, as well as the online e-commerce mainly focuses on discount sales business and low gross profit, its performance is declining.

In July 2020, Senma clothing announced that it plans to sell 100% of the assets and business of its wholly-owned subsidiary sofizasas (sofizasas owns 100% equity of kidiliz group) to Senma group, the third largest shareholder of the company, in order to reduce operational risk and avoid greater loss of performance.

It is understood that kidiliz group is the overseas children’s clothing business of semma clothing. On April 28, 2018, in order to promote the high-end development of children’s clothing business and expand overseas markets, Semir International Group (Hong Kong) Co., Ltd., a wholly-owned subsidiary of Semir clothing, acquired 100% equity and creditor’s rights of sofizasas in cash for about 110 million euro (about RMB 844 million), thus achieving the goal of acquiring all assets of kidiliz group.

Although the performance suck, but did not affect Semir’s clothing bonus plan. According to the announcement disclosed by semma clothing, according to the profit distribution plan approved by the board of directors on April 9, 2021, the company will distribute 2.5 yuan cash dividend (including tax) to all shareholders for every 10 shares based on the share capital on the equity registration date determined when the company’s future profit distribution is implemented, and give 0 bonus shares (including tax), instead of increasing the share capital from accumulation fund.

In the view of investment and financing expert Xu Xiaoheng, continuous and stable cash dividends are the embodiment of the investment value of listed companies. Especially in the context of regulatory encouragement of cash dividends, listed companies want to boost investors’ confidence by increasing dividends. However, it is not worth encouraging to pay dividends for the declining performance. The company should act according to its actual situation.