It is understood that since the launch of “fire magic mirror”, with its original “interactive content” mode, it has been highly praised by users and investors for its ultimate intelligent fitness experience. During this press conference, fire announced the company’s completion of US $300 million round B financing. This financing also marks the birth of the largest round B financing in the field of sports and fitness in the world. In the future, fire will continue to increase investment in interactive content and technology development, enabling sports and fitness by means of science and technology, and helping more people have a healthy life. 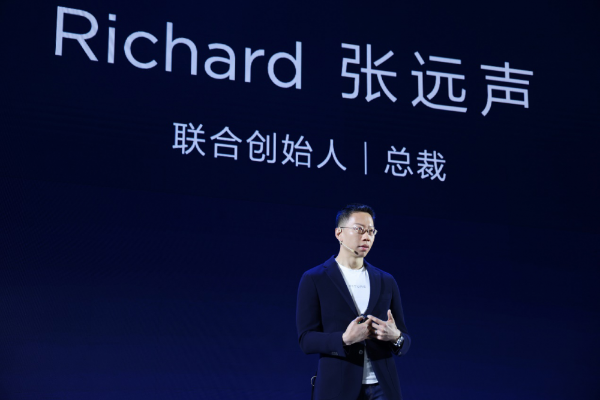 As the largest emerging market country, China has a huge consumer market with the largest global growth potential that can not be ignored. Relevant data show that China’s regular exercise population is more than 4 times that of the United States, and the per capita consumption of fitness is 1.3 times that of the United States. However, due to the limited carrying capacity of traditional fitness services and the absence of fitness application services, China’s huge intelligent fitness market has not been fully activated, and its penetration rate and retention rate are lower than those of mature markets such as Europe and the United States.

At the press conference, Zhang Yuansheng, co-founder and President of fire, predicted for the first time that the fitness industry would develop towards the trend of “intelligence, interconnection, diversification and popularization”.

Secondly, as the most important data acquisition terminal in addition to wearable devices, fitness equipment is bound to break away from information island and become a part of intelligent interconnection. Because the customized intelligent fitness service can not do without the support of effective data; and fitness as a behavior with high social attributes, the community interconnection among users will also become an important part of the pan fitness service.

At the same time, the fitness service will not be limited to the niche projects of traditional gymnasium. Fitness as a pre means of health management, its content category should adapt to the diversified development of people of all ages and circles.

Finally, as the intelligent terminal is accepted by more people, the intelligent home scene breaks the time limit, the fitness category is more diversified, and the intelligent fitness is also close to the grand goal of universal popularization. A society with high fitness penetration rate is also a sign and inevitable result of a mature and developed society.

Based on the basic judgment of the development trend of the fitness industry, on the premise of deep insight into user habits and pain points, fire puts forward a new fitness concept of “enjoy”, namely “fire fitness science”. It advocates a new fitness idea of enjoying pleasure, and hopes to fit the fitness culture of the new generation of users through the interpretation and guidance of innovative ideas.

This kind of fitness culture, which advocates enjoyment, is just what the Chinese fitness market and even the previous generation of users lack. In the past, it is not surprising that the penetration rate and retention rate of China’s fitness market are both low when we simply equate self-discipline, harshness and pain with fitness. The lack of fitness culture makes fitness become a hobby with high threshold and high difficulty. The fitness concept of “enjoy” advocated by fire will be able to break this dilemma in the ideological dimension, help new users establish the enjoyment and love of fitness from the concept, and finally create the missing fitness culture in China.

At this press conference, co-founder and president Zhang Yuansheng shared the core of “fire fitness”, that is, the pursuit of sports fitness does not need to rely on strict self-discipline as before, but should be the enjoyment of fitness pleasure. As the nature of sports in human gene, the physical satisfaction obtained by fitness is even beyond the general level of material satisfaction. Fire advocates a more flexible and fragmented way of fitness. With the help of intelligent terminal, the body can complete the fitness behavior through enjoyment, pleasure and pleasure. This is the concept of enjoy fitness for the new generation of users. Through this smart mirror, we can open a new fitness world for users.

According to fire, the core of intelligent fitness is content. In order to create high-quality intelligent fitness original content, fire has built a 4000 square meter Hollywood level “fitness dream workshop”. According to Xie Dingyuan, vice president of fitness content, at the press conference, the world’s largest fitness content creation base has four super large recording and broadcasting halls, all of which adopt satellite TV level full process production line system and 4K film level video recording system to ensure the output of the most fidelity fitness teaching picture quality.

The intelligent fitness mode advocated by fire is not only reflected in the technical field. Through professional video recording and high configuration terminal, the subtle expressions and movements of coaches can be captured and presented, so that coaches can create an infectious fitness atmosphere remotely. Through the coach’s one-stop course recording, oral broadcasting and encouraging interaction, users can enjoy intelligence and get a sense of company at the same time. Furthermore, fire has established the world’s first professional fitness music lab, which can quickly guide users to achieve the best state from the audio-visual two dimensions. 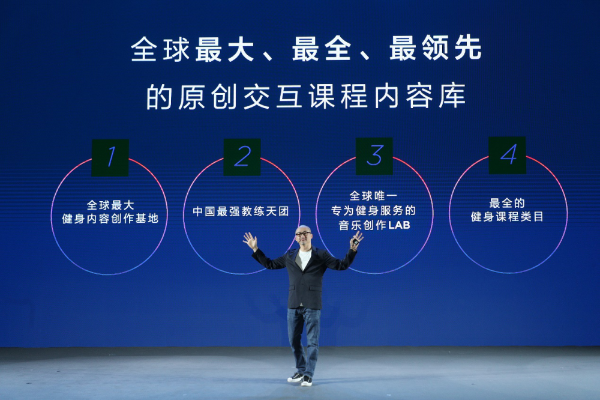 With more than 200000 hours of teaching hours, more than 10 years of average teaching experience, and more than 500 awards, fire has updated more than 5000 fitness courses every year, and has the most original and comprehensive interactive fitness content library in the world. At present, the courses have covered the mainstream sports and fitness categories such as strength shaping, yoga, combat training, posture correction, Pilates, aerobic dance, maternity exclusive, Barre, stretching, HIIT, sports challenge, etc., aiming to make every circle and age group find the right fitness direction.

On the basis of having high-quality content, in order to solve the bottleneck of the lack of “interaction” in traditional fitness applications, fire has applied automatic driving technology to the field of intelligent fitness for the first time in the world. Fire combines AI human body dynamic sensor with self-developed motion algorithm engine recognition system, so that consumers can complete human-computer interaction without any wearable products or sensor assistance.

According to Fu Qiang, co-founder and chief technology officer of fire, the scale of the AI team has reached 100 people, including top talents who graduated from Stanford University, Carnegie Mellon University or worked in apple, Xinjiang and Tesla. The self-developed “fire motion engine” has the ability of intelligent error correction for users’ fitness posture. 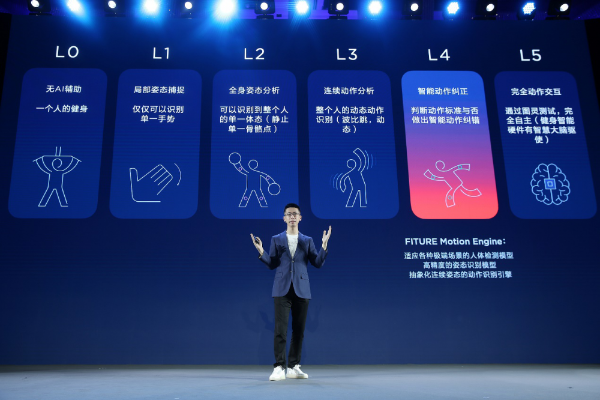 Now, as the pioneer of intelligent fitness interactive content experience, fire has realized its own L4 level, that is, the human detection model adapting to various extreme scenes, the high-precision posture recognition model, and the ability of action recognition engine abstracting continuous posture. Its technical strength surpasses all intelligent fitness terminals in the world.

Since its establishment, fire has won the favor of the global capital market with its precise positioning, advanced technical reserves, first-class team and original business model. Zhu Xiaohu, the managing partner of Jinshajiang venture capital, once said that “intelligent fitness is a 100 billion level platinum track, and he is very optimistic about the player with the ability to redefine the category like fire”, and forwarded the relevant report to fire platform in the circle of friends on the eve of this press conference.

Before this round B financing, fire has successively conducted three rounds of financing: in August 2019, it obtained the angel round financing of US $6 million from Sequoia Capital China Fund; in September 2020, it completed the round a financing of US $65 million led by Tencent, supplemented by Sequoia Capital China fund, and followed by C capital, Kaihui fund, black ant capital, CPE, Bai and all star fund; in December of the same year, it completed more than US $20 million The US dollar a + round financing is jointly invested by Weilai capital, Jinshajiang venture capital and Z1 capital.

For the fitness industry under the development trend of “four modernizations”, fire always firmly believes that users are the only driving force for change. In order to let Chinese fitness users experience the ultimate intelligent fitness experience with the lowest threshold, Zhang Yuansheng, co-founder and President, announced at the press conference that “fire national intelligent fitness plan” will be officially launched today.

It is reported that fire will open 100000 places nationwide to enjoy the interactive content experience of the product for free. This promotion strategy will cast a “nuclear bomb” influence on the field of sports and fitness, and is the largest free experience activity of fitness products in the world so far. According to the introduction, users can submit applications through the official account of FITURE, WeChat’s official account and Zhang Yuansheng’s official micro-blog entrance. After examination and approval, users can try FITURE mirror for 14 days without charge. After the experience is completed, users can choose whether to officially purchase.

The next five years will be a critical period for the fitness industry to transform into “four modernizations”, which is also a systematic opportunity driven by consumption upgrading and experience upgrading. As the first brand of intelligent fitness, fire is willing to share industrial Dividends with partners. At the meeting, Zhang Yuansheng also announced that he had formulated a “partner win-win plan” for the distribution system fire, and planned to invest 1 billion yuan to subsidize the “city partners” of fire nationwide, and continuously provide financial support for the sales channels to achieve a win-win situation.

To sum up, with the global leading business model of “hardware + content + service + AI”, fire tries to start a revolutionary change in the fitness industry. Through the promotion of interactive content mode, carry forward the idea of enjoy fitness, create a new fitness life for the new generation of users, and make the popularization of sports fitness possible. 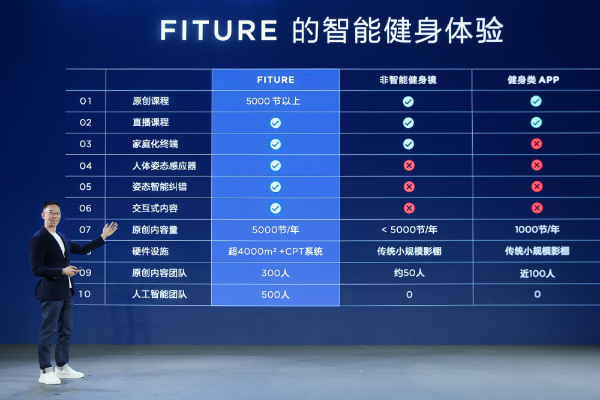 “Starting from a mirror, to promote the popularization of intelligent fitness, this is the journey of fire.” Zhang Yuansheng, co-founder and President of fire, said at the press conference: “we hope that everyone here will join us from today on and witness a new era for China’s intelligent fitness industry.”