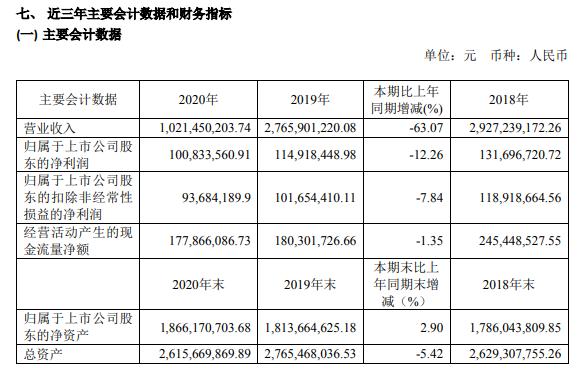 During the reporting period, under the leadership of the board of directors, the operation and management team of the company actively complied with the trend of consumption upgrading, focused on how to meet the change of consumption demand, promoted intensive cultivation and innovation transformation of the main retail business of the company, relied on the construction of internal control, strengthened the awareness of risk control and cost control, continuously improved the level of corporate governance and internal management, and ensured the sustainable and steady development of the company. During the reporting period, the company achieved an operating revenue of 1.021 billion yuan, with a year-on-year increase of – 63.07% (Note: the company implemented the new revenue standard for the first time, the net income method was adopted, and the cost of income decreased at the same time. In addition to this factor, the revenue increased by 4.65% after adjusting the data of the previous year according to the new standard); The net profit attributable to shareholders of listed companies was 100.8336 million yuan, a year-on-year decrease of 12.26%; The gross profit rate of the main business was 41.15%, an increase of 26.36 percentage points year on year.

According to digbei.com, Guofang group is the largest chain retail enterprise in Gansu Province, which is mainly engaged in department stores, supplemented by supermarkets and electrical appliances.