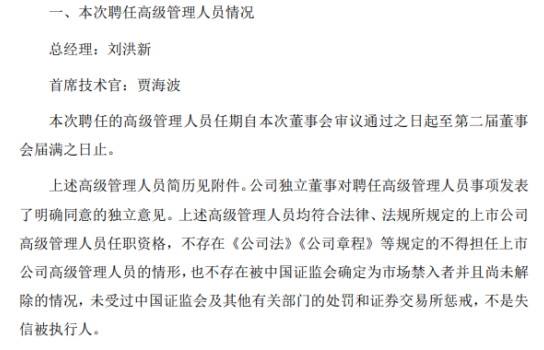 The independent directors of the company expressed their independent opinions on the appointment of senior managers. The above-mentioned senior managers all meet the qualifications of senior managers of listed companies as stipulated by laws and regulations. There are no circumstances that senior managers of listed companies are not allowed to act as stipulated in the company law and the articles of association. There are also no situations that the market is prohibited by the CSRC and has not been lifted. They have not been punished by the CSRC and other relevant departments Punishment and stock exchange punishment are not those who break their promise.

According to the company’s report for the third quarter of 2020, the net profit attributable to shareholders of Listed Companies in the first three quarters of 2020 was 324767077.35 yuan, an increase of 1.99% over the same period of last year.